Kid Who Had Sex with Hot Pocket Interview 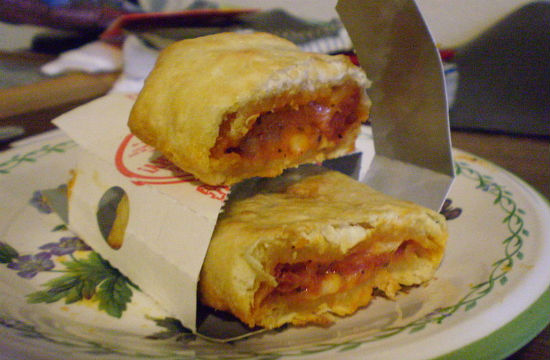 Sure, there was a guy who complained to Domino’s UK via Twitter that he had injured himself (severe burns) making sweet amore to a pizza, but was there ever any actual evidence of that? Like, say, a quick Vine video? Documenting the horrific, horrific penile burns? Of course not, because no one would ever share a video of themselves copulating with a pastry on social medi — oh. Wait.

Yeah, no, this bored 18-year-old living in New Hampshire did just that, among other reasons: to get Twitter famous, because there’s nothing to do in New Hampshire, because it’s cold there in the winter, and, of course, because “it was so fuckin’ funny.”

First We Feast blessedly tracked down the kid who gently (we’re certain) schtupped a Hot Pocket, took video of it which he posted to Vine, and then promptly got himself banned from both Vine and Twitter. Here are some highlights from the gripping interview.

Are you familiar with the one or zero scale?
No, I’ve never heard of that.

So basically, instead of rating someone’s looks from zero to 10, it’s just a binary scale: Would you have sex with them or not.
Oh yeah.

Okay, so one or zero: McFlurry.
One…oh wait, no. Zero.

Yeah, too cold. One or zero: Ramen noodles.
Oh shit. Pretty salty, but I guess one.

One or zero: Turducken.
[Silence.]

Have you ever had a turducken?
No, I’ve never heard of that.

That’s the ultimate. What about a baguette?
Baguette? Zero.

Are there any foods that you love so much from childhood that you would never think of them in a sexual way?
Probably pancakes. I would never defile a pancake like that.

On Hot Pockets vs Real Ladies:

Has the Internet fame helped you meet any girls?
Well, I’ve always had a big fan base anyway, but I haven’t actually met anyone from it. But there’s a lot of girls that were, like, turned on by it somehow, which I thought was really cool. There were a lot of girls that were like, “Is it weird that you doing all that makes me more attracted to you?”

When you got all those replies from people, did you hit any of them up?
There were really so many. I tried to, but I’m pretty fucking busy, like, more focusing on my tweets and my next stunt. But, I mean, I text a few girls now….I try not to be a huge manwhore. Like, I just try to find one nice one.

Ladies, if none of you nice ones move in on this kid, we will.