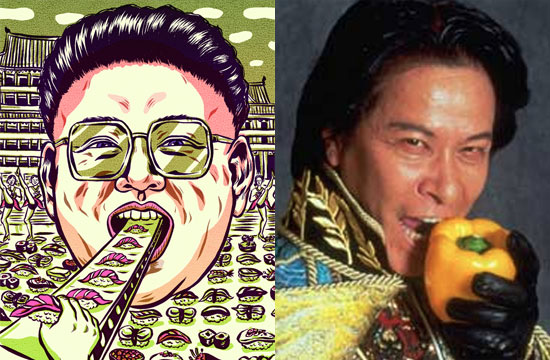 Is it fitting that the story of Kenji Fujimoto (a pseudonym), the Japanese-born sushi chef and personal confidante to North Korean dictators Kim Jong-Il and Kim Jong-Un, would involve the crazily ornate show Iron Chef? Probably not, considering how crazily ornate (and horrifyingly dystopian) North Korea is itself. Deep in GQ’sbizarrely fascinating profile of the sushi defector is a very odd blurb about how much Kim Jong-Il loved Iron Chef — and how it helped Fujimoto escape his grasp.

No, really, Kim Jong-Il really loved the Japanese version of Iron Chef, whose Chairman and Host Takeshi Kaga was sort of like the Dear Leader himself: a lover of pageantry who forced four chefs to fight culinary battles on a regular basis in a Kitchen Stadium (sans the entire reeducation camp, gulags, torture, and forced starvation thing). And even weirder, it was how the dictator received his culinary education: “When Fujimoto’s culinary travels took him to Japan,” author Adam Johnson wrote,” he stocked up on VHS tapes of the latest episodes so he and Shogun-sama could have long discussions about foie gras, truffles, and Kobe beef.”

But after years in North Korea, being held prisoner by the Japanese, learning about the inhumane treatment given to dissidents, and house arrest after innocently disobeying the regime, Fujimoto decided to escape. How’d he do it? Using one of the Chairman’s favorite secret ingredients, sea urchin roe!

In March 2001, Fujimoto casually mentioned to Kim Jong-il that he had a new Iron Chef video, an episode Kim had never seen. When they watched it together, Kim discovered the episode’s “mystery ingredient” was one he’d never tasted before: sea-urchin roe, or uni. When Kim asked about uni, Fujimoto described it as the most exquisite delicacy in the world, one whose creamy texture was both oceany and sweet. It could only come from Rishiri Island, off Hokkaido, and only an experienced sushi chef could discriminate good uni from bad.

Though Kim had banned Fujimoto from travel after his Tokyo arrest, the idea of a new delicacy proved too much. Just this once, Shogun-sama said, then made Fujimoto utter a personal promise to return. That’s all it took. Shogun-sama told him to fly right away….

Fujimoto said good-bye to his wife, Jong-yo, in the parking garage of the Koryo Hotel, drove to Sunan airport, abandoned his coveted Mercedes in the lot, and flew to Tokyo on the pretext of buying uni at the Tsukiji fish market. There, after spotting a team of minders loyal to North Korea, he ate Inoue ramen and then disappeared into the crowd.