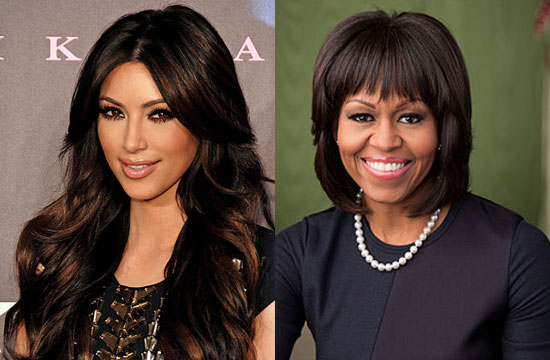 Whoever handled the reservations line at Carbone, can you please tell us how you managed to book Kim Kardashian and Michelle Obama for lunch at the same time last Monday? Because if this Page Six report is true, you pulled off the pop culture collision of the century. We salute you and your troll impulses.

To make this awkward lunch even more awkward, their run-in came shortly after Kardashian’s motorcycle fuckbuddy Kanye West slammed Vogue for declining to put Kardashian on its cover, while Michelle Obama has appeared twice. Oh, and can we forget about the part where Kanye stoked a feud with Michelle’s president husband? Nope! No, we can’t! (We were going to not go with a “Yes, We Can” joke, but ever since universal health care crumbled into the dust, we can joyfully go back to mocking Obama.)

Anyway, we digress. We are now proud to present: THE IMAGINARY INTERNAL MONOLOGUES OF KIM KARDASHIAN AND MICHELLE OBAMA.

[LIGHTS UP on Michelle and Kim sitting on opposite sides of the Italian red sauce joint, separated by a sea of nervous diners, glaring daggers at each other as they stabbed into their quivering tortellini.]

MICHELLE: What is she doing here? Out of all the places in New York god-damned City, she’s here? I have to share oxygen with her?

KIM: Why is that woman staring at me? Oh! She looks like the mad face from that picture book!

MICHELLE: [while mashing the pasta into a helpless pulp] She probably thought that ‘Carbone’ started with a K.

KIM: Maybe she wants me to make a mad face back, just like the doctors told me! [Kim physically attempts to arrange the muscles on her face into a frown.]

MICHELLE: And seriously?! What’s with her voice? Did the chefs put helium in her fucking champagne? Is that a hot food trend? Oh, wait, no, it’s her normal voice.

KIM: Wow, I’m so good at acting like a human. I should make a movie. Maybe I’ll win one of those Oscar midgets.

MICHELLE: Honestly, I’m not so sure that her baby daddy’s actually Kanye. I mean, with a name like ‘North,’ she was probably fathered by a boy from One Direction.

KIM: Why are they all named Oscar? Are they like, midget brothers from Mexico?

MICHELLE: Except none of them are black. Ah, so much for that theory.

[One of Carbone’s legendary male waiters wanders in with a large wheel of cheese, ready to charm the pants off either the First Lady or Mrs. West. The girl hatred in the room is too palpable, and — to his shock — the Parmesan wheel melts instantly from the loathing. He flees.]

MICHELLE: Oh, I hate you, Kim. I hate you and your nasally voice and your obnoxious fiance and his nasally voice. I hate your family and your television career and the buoyancy of your ass. If I were Barack, I would fly an F-15 across this room right now and drone strike you into oblivion. As it stands at the moment, all I can do is tell Sam Kass to undercook your eggplant. And maybe get the Muppets to shun you. [She leans back, imagining.] Ah, wouldn’t that be swell — to see Elmo call you a talentless hack on Sesame Street? Now that would be change I could believe in.