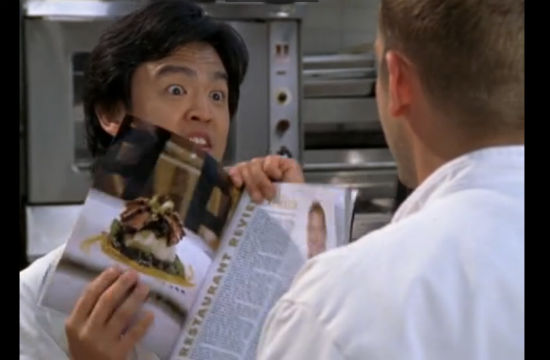 On this week’s episode of Kitchen Confidential, we open with the employees of Nolita gleefully celebrating a dish of Jack Bourdain’s (Bradley Cooper) which has landed a coveted spot in the pages of Food and Wine Magazine. The only problem? It’s not Jack’s sesame-crusted yellowfin tuna with morels and beluga caviar recipe. It’s Teddy’s (John Cho). In what proves not to be Teddy and Jack’s first rodeo, Nolita’s Fish Master Flex becomes deeply offended that his head chef took credit for his dish, and Jack mishandles his bruised ego, only making the situation worse. So Teddy quits for what is, according to Seth (Nicholas Brendon) and Steven (Owain Yeoman), the seventeenth time.

According to past experience, Teddy quits after a hissy fit, goes home, and drinks it off with his BFF, a John Dory, then returns by late afternoon as if nothing happened. So, just like real life!

Back at Nolita, the boys on the line (still no Becky) try to bully Chet out of the kitchen, but he keeps a smile on his face throughout the torture, which includes getting stabbed with a roasting fork, and being slipped some fun-looking hallucinogens via one of Seth’s profiteroles, resulting in an unsavory defiling of a shrimp salad. Meanwhile, Jack realizes he can’t replicate Teddy’s tuna dish by his lonesome, but everyone in the dining room wants the magazine fish! DISASTER. The only solution? For Jack and Steven to straight-up kidnap Teddy from Jazzfish and drag him back to Nolita against his will. Frankly, the amount of non-consensual lawbreaking that happens in this fictional culinary underbelly-based-on-the-real-world-according-to-Anthony Bourdain is mind-blowing. Oh, but, don’t get us wrong. We totally buy it.

Hilarious, now-celebrity cameos in this episode include a subplot involving Iqbal Theba, better known to Glee fans of today as McKinley High’s Indian-American Principal Figgins. In this pre-Glee episode of Kitchen Confidential, he plays the parking attendant of the lot next door to Nolita, who trades Steven joyrides in sexy cars (which he uses to impress girls on dates) for sneaked servings of Teddy’s famous yellowfin tuna dish. However, once Jack takes over making them (badly), Theba’s character cuts Steven off from the fancy cars. Luckily, Tanya (Jamie King) is on hand to pose as a high school reporter who manages to distract him long enough for Steven to jack a Ferrari with which to reclaim Teddy. Phew!

Check out the full episode, in all its chef primadonna glory, below.