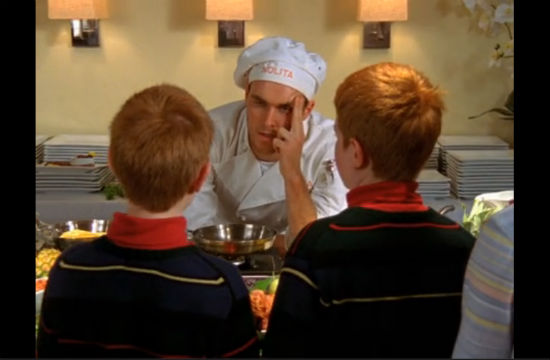 On this week’s Kitchen Confidential, Becky (Erinn Hayes) magically reappears! …To bone Chef Bourdain (Bradley Cooper). Yes, apparently that two episode-long break her character took was to recover from their last romp, but they’re at it again, while Jack lectures us in a regretful voiceover about how the forbidden fruit is impossible to resist. Steven (Owain Yeoman) tragically attempts to rekindle his and Becky’s romance but she, all of a sudden, is a stickler for Jack’s no dating policy. Hmmm… He rather quickly pieces together that there’s another guy in the picture, but assumes she’s shagging Albert.

Oh, by the way, there’s also a very irritating chocolatier by the name of Albert peddling his bonbons to the resto for a partnership but Seth (Nicholas Brendon) is all, “Bitch please, we got a patissier and his name is ME.”

Later, Jack gets a lecture from Pino (Frank Langella) about how he can’t afford sweetbreads if no one orders them, and Becky has the genius idea to start offering brunch service (with last night’s leftovers thrown into a frittata and served at astronomical prices, natch). That way, the extra revenue can keep Jack’s haute cuisine on the menu, regardless of whether or not anyone appreciates it, and Becky gets to be in charge of something.

The kitchen staff initially balks at the idea of having to wake up at 6am to serve eggs to screaming babies and old crones, but, Jack pulls rank and forces everyone into it. After service and through a series of lingerie-related events, Seth eventually discovers that the only reason the kitchen is now serving brunch is because Becky and Jack are totally in cahoots. And by “cahoots,” we mean “each other’s pants.”

Meanwhile, Mimi (Bonnie Somerville) has fallen hopelessly in girl-crush with Becky and wants to live with her, now that she’s voluntarily cut herself off from Daddy to assert her independence. It’s just like Girls! Oh, wait. No it’s not. Because this is the mid-2000s. Becky responds to her clingy new friend by violently surprise-kissing her firmly on the mouth. NOW it’s like Girls. Girl-crush dissipated. Things are now weird.

Albert “accidentally” hits Seth with his car, and, while under anesthesia, Seth lets Jack’s cat out of the bag. And by “cat,” we mean “Beck — never mind. The kitchen staff hates their executive chef for trading brunch for sex, but Pino loves the profitable resto addition. He issues cash bonuses to the staff and all of a sudden, everyone is down for brunch service. Ah, restaurant staffers. So easy to please! But Jack is left down a chef: Becky asked Pino to let her head the kitchen of one of his new restaurants and coaxed him into letting the brunch be her audition. She books the gig.

So, now, Jack has no kitchen sexy time and 6am Sunday wakeups. But somehow, as determined by the voiceover, life is still rosy and gay. Such is the life of Jack Bourdain.

Watch the episode below!