Kitchen Confidential Recap: The Kitchen Is No Place For Sobriety 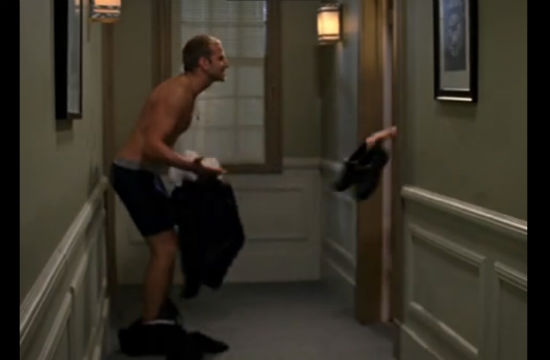 Welcome to another week of Kitchen Confidential, the TV Series. This episode, like the previous one, features a shirtless Bradley Cooper. You in? Great. Us, too.

We learn at the top of the ep, in ubiquitous voice-over fashion, that being head chef at a restaurant is exactly like being a drug addict: late nights, pushing yourself to the limit, and lots of passing out on the floor. Jack Bourdain (Bradley Cooper) is awoken in his shmancy Nolita office by Jim (John Francis Daley), and, rather than allow rumors of him sleeping on the job (read: living out of the office) to spread, Jack tells rookie Jim it’s all part of “the chef’s code.” Those closed eyes and that comatose state you see before you? That’s “visualizing the menu.”

Restaurant owner Pino (Frank Langella) harangues Jack about some missing steaks: where once there were twelve, there are now only eight. We suspect Nolita’s resident Brit/sous chef/klepto Steven (Owain Yeoman) may have had something to do with it. And we would be correct. While Jack is doing his best to assure Pino he isn’t, in fact, helming a band of thieves, he also tosses Steven into the walk-in for a little lecture. Of course, “stealing” the steaks was all in the interest of bartering with several kitchens around the city to ensure that Jack Bourdain would be the only chef in NYC serving maitake mushrooms that night. Jack appreciates the effort, but scolds his second-in-command for not playing by the rules. Steven points out that Jack should probably identify the spy in the kitch — duh, Mimi (Bonnie Somerville). The two hatch a plan to distract her from the goings-on in the back of the house by declaring her floor captain for the front of the house. Isn’t this a Top Chef Restaurant Wars technique?

So, while Mimi’s initiating a reign of terror out front (by banning pooled tips, much to the dismay of her fellow waiters), Jack is in the kitchen tossing plates that aren’t perfectly presented. His brigade de cuisine is mothereffing over it. The only solution? Get him drunk. Oh, wait, he’s sober now. Okay, getting him laid it is! But, even at the bar, Jack can only obsess over how poorly service went. Steven and Seth (Nicholas Brendon) give him a firm nudge ladyward, but, in typical Jack Bourdain fashion, the woman they literally shove him into is an ex. Is there a woman in New York this man hasn’t slept with? Apparently not, and, sweet Jesus, why do we not live in this fictional holy land?

Jack tries to smooth things over with his scorned ex, Audrey (transgressions include passing out at her mother’s birthday dinner and vomiting on her), and succeeds with all the panache he managed to woo Reese with in the previous episode. Audrey blows him off with a calculated “people never change.”

The next night, Jack has to shut down a shady deal of Steven’s yet again, while Pino appoints Tanya (Jamie King) as the new kitchen spy. CameronSam Pancake) and Donna (Tessie Santiago) try to one-up each other for better tips, and lo and behold, Jack’s ex shows up at the bar with her Safety Friend, Wendy. She coolly blows Jack off a second time and Jack allows Wendy the Safety Friend to drink for free. A pack of douchey law firm interns on bulging expense accounts call in to make a rez and lucky lucky Cameron picks up the call. Sorry, Donna.

Tanya uses her feminine wiles to take up a post in the kitchen by asking Seth if she can watch him frost terrines, which is just as HBO-worthy as it sounds. Unfortunately, while she’s getting a pastry lesson, she fails to notice that the cappuccino machine has gone missing. Pino is displeased. He storms in on Jack wooing his ex-lady and instructs him to locate the missing caffeination device on threat of finding a horse head in his bed the next day, or some other Italian mob reference Frank Langella would be awesome at pulling off.

Jack immediately accuses Steven of stealing and demotes him until he hands over the missing machine. Jim drops some church on us: “You know, sometimes yelling is just a loud way of saying ‘I love you.'” …Noted, Jim. Now back to peeling potatoes for you. Seth has to separate Jack and Steven just as the boys from the law firm arrive and kick off their evening with three $1000 bottles of wine. Jack and his ex-lady make out, but he stops himself from taking her in the walk-in (worry not; there is a dream sequence of things he’d like to do to her in the walk-in, if he wasn’t a man with impeccable self-restraint). He tells Audrey he’ll meet her in ten, when service is over. Unfortunately, the law firm crew starts ordering like foie-starved restaurant critics, and, with the assistance of Donna’s rack, Jack is convinced to keep the kitchen open late to feed them. Ex-lady gets cranky.

While Jack is lecturing Steven some more, the lawyers pull a “chew and screw” and ditch their $18,000 tab. Quick as a flash, Jack lets Steven off his leash and he goes after them. After a minor incident of assault, Jack realizes the beauty of having a criminal on his team. The tab is paid up. Pino demands Jack fire Steven for being a liar and a thief, but Jack stands by his man with his patented half-smile smirk and a one-liner: “Everybody’s something.”

All of a sudden, the cappuccino machine magically reappears, and it’s revealed that Jim took it to get it cleaned. Jimmm! (Okay, that was the episode’s single cheesy pratfall.)

Jack finally drags himself to Audrey’s where she greets him with candles and lingerie. Unfortunately, after his long night, he passes out on her…again. He gets the boot and heads back to the kitchen, where he finds Jim has assumed his spot, sleeping on the couch in an attempt to live by The Chef’s Code. Sigh. You can’t hate him.

Lesson of the ep: keep the restaurant operating like a theater, with a happy audience out front, blissfully unawares of the “Hiroshima” going down in the back.