Lady Chef Stampede: The Life And Times Of Dione Lucas 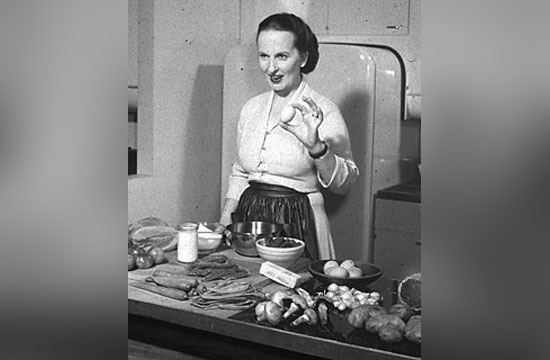 Founded by Marthe Distel, the Cordon Bleu cooking school opened in 1895, and most of its first students were men. In the 1920’s, the first female graduate to win the coveted Grand Diplome was Dione Lucas, who was British (well, born at the British Consulate in Venice, and raised in France). She had studied the cello and jewelry making (her dad’s career) before going to Le Cordon Bleu when she was 16 where one of her teachers was the legendary Henry-Paul Pellaprat. At first, she wasn’t welcome, and all the male chefs were outraged that she’d been admitted, forcing her to chop onions endlessly. “I cried for 48 hours,” she later wrote, “and then I cried no more.”

Shortly after graduating she moved back to London and, with Rosemary Hume, opened the first Cordon Bleu school and restaurant in London. It was so successful that in 1937 she opened a second restaurant, Au Petit Potager, on Wigmore Street. At some point she became a hotel chef in Hamburg where she cooked for Adolf Hitler in the late 1930’s. “I do not mean to spoil your appetite for stuffed squab,” she wrote in her 1964 cookbook. “But you might be interested to know that it was a great favorite with Mr Hitler, who dined at the hotel often. Let us not hold that against a fine recipe though.” Let us not.

She closed the Cordon Bleu school and restaurant in London during the war (and later sold her interest to Constance Spry) and moved to Ottawa for the duration with her son and a friend’s three children who couldn’t afford to flee the Blitz. By 1942 she was in Manhattan doing prep work at Longchamps Restaurant on Madison Avenue and later that year she opened Le Petit Cordon Bleu restaurant and cooking school on East 60th Street. In 1948, she started to broadcast a one-hour cooking show on WCBS called To the Queen’s Taste from Le Petit Cordon Bleu, hosted by and starring Dione Lucas, making her the first woman to be a TV chef in the US or the United Kingdom.

The show ran for a year, featuring celebrities like Salvador Dali and Helen Hayes, but James Beard, who had a rival show on NBC, was an outspoken critic of her adherence to French techniques. The journalist David Kamp wasn’t a fan, either, writing, “she was small, stocky, and dour, with her hair pulled back tightly like a suffragette’s.” A review of the show written in 1949 by John Crosby, gives a pretty good idea of what it was like:

“Her worst experience came during the early days of the show. Mrs. Lucas was demonstrating the preparation of a hot chocolate souffle. After going through the mixing stages, she reached for a pre-cooked souffle to show how it looked when finished: Without her knowledge, a CBS technician had pulled the oven plug and the souffle was completely uncooked. When Mrs. Lucas pulled the paper off, chocolate spurted in all directions. Mrs. Lucas, paralyzed with horror, kept right on chatting about its glamorous appearance while the souffle dissolved, before her and everybody else’s eyes. The show drew to a close without further explanation… Not all [her] information is practical. Once she explained that the best way to locate truffles in a forest, was to follow a pig – Pigs love truffles. “Pregnant pigs, especially,” she added dreamily. “Pregnant pigs adore truffles.”

Although it only ran for a year, To the Queen’s Taste blazed a trail for Julia Child to follow later, and a few years later Dione Lucas returned to the small screen with her second cooking show, the creatively-named The Dione Lucas Cooking Show broadcast on WPIX starting in 1953 and syndicated to 60 cities. One of food’s first modern celebrities, she did endorsement deals, wrote books, appeared in magazines, and toured around, briefly cooking at the Four Chimney’s Inn up in Bennington, Vermont, and also spent a year in Australia cooking and appearing on Australian TV.

One of the most popular items on the menu at her Le Cordon Bleu restaurant in New York were her omelettes of which she said that the key was ensuring they “should never get any darker than a baby’s bottom.” In 1956 she opened the Egg Basket restaurant for Bloomingdale’s. Located on East 57th Street, it was a counter-style restaurant serving 16 different kinds of omelettes with an open kitchen where diners could watch her in action.

In 1964, she opened The Gingerman on West 64th Street, backed by the actor Patrick O’Neal and named after a Broadway play he was currently appearing in. A hallmark of the Gingerman, and of Potters Yard Brasserie where she also briefly worked in Bennington, was a window between the kitchen and the dining room so that customers could see her work. On the one hand, great. On the other hand, it sounds a bit like viewing an exotic zoo animal.

Fond of sipping brandy in the kitchen, or 50/50’s (ginger beer and Guinness) and fanatical about her omelettes (she would throw them out if the waiters didn’t pick them up instantly to serve), Lucas kept on cooking until 1970 when she moved to London to see her son. There she contracted pneumonia and died at the age of 61.

The first female TV personality, the woman who brought French omelettes to America, founder of numerous cooking schools (not just Cordon Bleu’s but also her own Gourmet Cooking School on East 60th Street and the Dione Lucas Store and Cook Center on East 51st), and the chef behind several Manhattan and London restaurants, Dione Lucas is barely remembered these days. There was a scholarship fund set up in her memory at the Culinary Institute of America back in the day, but no one seems to know about it anymore.

If you want to learn more about Dione Lucas, check out the links below:

A brief memoir from someone who worked with her at The Gingerman.

A really long bio of Dione Lucas, including a lot of details about her combative relationship with James Beard.

A long piece about her work on Australian TV.

A huge collection of ads and endorsements by Dione Lucas, including her fabulous line of GayWare

PREVIOUSLY: Cohen profiles the woman at the top of the culinary game, Elena Arzak.