Lady Chef Stampede: Where Are The Female Sushi Chefs? 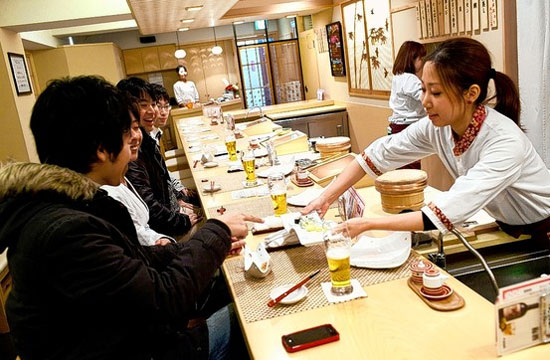 Today’s Lady Chef is that most elusive of all creatures: female sushi chefs.

As rare as unicorns, female sushi chefs are victims of archaic forms of sexism that I’m almost embarrassed to repeat. I don’t want to make Japan sound like some kind of Medieval dungeon, but there’s no way to talk about the obstacles female sushi chefs face over there without making Japan’s male sushi chefs sound like Movie-of-the-Week villains. Women who want to be sushi chefs in Japan are told their hands are too warm to make sushi (a theory that has been totally debunked by The Lancet back in 1998, men actually have the warmer hands), that all the perfume and make-up they wear will contaminate the fish, or that having their period near super-sensitive, delicate fish will cause them to taste bad.

On the other end of the spectrum, there was a huge burst of publicity back in 2010 for an all-female sushi restaurant in Tokyo’s Akihabara district called Nadeshico Sushi. But rather than striking a bold blow for female chefs, it swung in the opposite direction. Nadeschico is run by a guy named Kazuya Nishikiori who will only hire women between the ages of 18 and 25. “If someone wanted to work here and was 30,” he said to the Wall Street Journal. “I’d put her in the back.” Most customers thought the sushi wasn’t very good, but that the experience of interacting with a lady sushi chef was so novel that they kept coming back.

Japan had a lot of labor laws written post World War II with the aim of protecting women, but they wound up having the opposite effect. Until 1999, women weren’t allowed to work between 10pm and 5am which ruled out restaurant jobs. There’s also a special one-to-one relationship between the best sushi chefs and their customers, which makes even women eating high-end sushi without a man such a noteworthy event that it sparked a 2004 memoir, Solo Woman Sushi, about the author’s experience as a woman dining man-less at expensive sushi restaurants.

Here’s some simple math: the lady chefs have only been legally able to work for the past 14 years, plus it can take 10 years of training to make a sushi chef. The result? Across Japan’s 30,000 restaurants there are, by the best reckoning, only about 200 female sushi chefs today. Even though many Japanese chefs remember their mothers and aunts making sushi at home when they were growing up, you can still find dozens of out-of-date quotes about women making sushi without too much trouble: “If I saw a woman making sushi, I would be shocked,” a retired naval officer said in an NPR interview in 2001. “I don’t know if I would want to eat there. The ingredients and the procedures may be the same, but I couldn’t help but feel that the sushi has no flavor, no edge if it were made by a woman.”

It’s been easier overseas. Dozens of women make sushi across the US and Canada and many fell into it by accident. Yuki Sanda, a sushi chef at Boulder, CO’s Sushi Zanmai, was a professional chef for years when she arrived in Boulder in 1995, but even she was shocked when her boss (a Japanese guy) told her to be the sushi chef. “It’s very rare in Japan,” she said in a 2012 interview. “I haven’t seen any. I heard [of ] a few people, but I haven’t seen.”

Etsuko Needham, of Vancouver’s Bistro Sakana, was a 20-year veteran of the Kobe restaurant scene but she hadn’t touched sushi until 2004 when she moved to Vancouver. (Note: this informal ban doesn’t extend to sashimi, just to sushi) Once she opened her own restaurant she hired a series of male sushi chefs to teach her the basics, but even they had doubts (one of them took her husband aside and tried to tell him sushi was too difficult for his wife). Now she’s training female sushi chefs with the goal of having an all-female sushi restaurant, probably one whose motto isn’t “freshness and cuteness” like it is at Nadeshico Sushi. Meanwhile, in Toronto, as of 2010 there were literally three female sushi chefs (one of whom cooked for the Japanese Consul General).

The New York Times did a piece on female sushi chefs in 2001 with some sobering stats: six female sushi chefs in New York, nine in Los Angeles. The article is worth reading to get an idea of just how grueling a career and how much self-sacrifice is undertaken by these women who buck tradition. Most of them can’t just apprentice to a sushi chef, but instead have to spend years proving their worth. One, Egi Sugimoto (who was the sole female sushi chef at Sushi Rose in Manhattan), had to clean the restaurant and buy her own fish to practice on for months before being taken on as an apprentice. It was two years before she was allowed to serve a piece of sushi to a customer.

The lot of female sushi chefs seems to be changing not thanks to the work of one woman, but due to dozens of them who refuse to give up. Try as I might, I couldn’t find a single female sushi chef who was considered a pioneering rule-breaker; that may be because in sushi things seem to change slowly and with as little fanfare as possible, and they do so overseas before Japan. Away from their home country, male sushi chefs seem to relax and acknowledge how silly the restrictive traditions are. In 2000, when the owner of Sushi Rose asked his executive chef, Etsuji Oishi if a woman could work on his staff, he recalls, “When I was first asked if Eri could work here, I said nothing…Men and women — there’s no difference. My mother was the chef of a restaurant. I knew women could cook.”