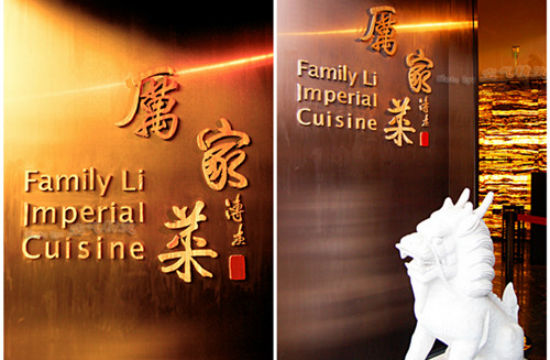 Welcome back to the Lady Chef Stampede. This week, I’m talking about a chef who single-handedly kept alive an entire history of food, but who has received almost no credit. There’s very little about her that I can find in English, but it’s time that everyone celebrated the Lady Chef Supreme, Li Li. But to understand what she did, you have to know about her great-grandfather, Li Shunqing.

During the Qing Dynasty (1644 – 1912) Imperial cuisine reached heights that made France’s royal cuisine look downright minimalist. By the turn of the century, during the reign of the Empress Dowager Cixi, the Qing Dyansty was petering out but its food was going strong. Menus for meals were arranged by the Guang Lu Temple and overseen by the Lord Secretaries. Hundreds of chefs from across the country had been ordered to come to the capital and prepare one dish each. Close to a thousand of those dishes were recorded and kept on file resulting in an Imperial menu that consisted of what were considered the best Han and Manchu dishes as well as dozens of regional specialties. It was a roadmap of the best Chinese dining across the entire country and every evening about 100 dishes from this menu were prepared to exacting specifications, all of them temperature controlled every second of the meal so that they were constantly perfect, and served with great ceremony to the royal family. Attendants would be on hand during the meal to record how many bites of each dish the Empress Dowager took, her facial expressions while she ate them, and any comments she might make. These notes were pored over to determine her favorite foods.

Li Shunqing was the minister in charge of sending soldiers to protect the kitchens and the meals as they were transported to the dining room. He was also in charge of the eunuchs who tasted every dish to make sure they weren’t poisoned. When the Empress Dowager was finished with a meal, leftovers were served to the ministers, so Li Shunqing became familiar with their taste.

Empress Dowager Cixi died in 1908 and Li Shunqing retired to Beijing and lived out the rest of his life in luxury. His household had over 30 servants to take care of his 90 rooms and a garden containing deer, peacocks, walking paths, waterfalls, and fountains. There he wrote down his massive record of Imperial cuisine. Although he wasn’t a chef and therefore some of the details were vague, he managed to record hundreds of recipes, their look, taste, and preparation. When his son was born, however, history began to have its way with the Li family. A major general in the Northern Warlords Government of China, his son was a good-for-nothing who spent his days breeding pigeons. Under his guidance, the Li family fortunes fell. As the Imperial government collapsed and China became a republic, he mishandled their fortune so that the entire family had to move to a home with only 20 rooms, and then when the Communist Party took over the government his family had to move to an even smaller home consisting of no servants and just a handful of rooms.

But even though Li Shunqing’s son couldn’t live up to his father’s example, his grandson would turn out to carry on his legacy. Li Shanlin was born in 1920 when the family still had much of its wealth. Starting at 10 years old he began to hang around the kitchen during mealtimes, watching the family cooks prepare Imperial cuisine for his father’s famous dining room. At first the chefs didn’t want him to learn what they were doing, but Li Shanlin started only coming to the kitchen during its busiest times so that in the chaos cooks would order him to run errands and help out with small tasks. Soon he became a part of the kitchen life and began to learn the recipes.

But after the Communist Party took over China and in the wake of WW II, the entire country had a rough time. Family connections were no longer valuable, and food was scarce. The Li Family were no longer proud inheritors of a historic tradition, instead they were reduced to just another bunch of starving people, crammed into a three-room apartment in Beijing. Li Shanlin’s wife earned 69 RMB every month as a pediatrician, and that was how they supported themselves and their four children: three daughters and a son. The Li Family kept ducks, pigs, and chickens to help with the food shortage, and Li Shanlin became a mathematics professor while also teaching his children how to cook Imperial cuisine. But things got harder with the coming of the Cultural Revolution in the late 60’s.

During the Cultural Revolution, the family starved, keeping alive memories of Imperial Cuisine as Li Shanlin instructed them how to make imaginary dishes, and how to cook food that wasn’t there. Occasionally, on Chinese New Year’s, they would pool food with their neighbors and cook a meal that approximated Li Shanlin’s memories. In 1971, he retired from his job as a professor and shortly afterwards Red Guards visited their home and destroyed his written record of the 300 remaining dishes of Imperial cuisine. From then until 1976, when the Cultural Revolution ended, Li Shanlin and his family just did their best to survive while he attempted to rewrite the recipes from memory.

On National Day in 1984, CCTV, the Chinese television channel, held a televised cooking competition to celebrate the 35th anniversary of the founding of the republic. 2800 cooks entered the contest, and one of them was the second-oldest Li family daughter, Li Li. Encouraged to enter the competition by their neighbors, the Li family decided that Li Li was the best cook among them. The only problem was that she wasn’t a professional cook. Her mother had taught her nutrition, and her father had taught her Imperial cuisine, but she was going up against professional chefs from hotels, government restaurants, and famous kitchens across the country.

The first part of the contest was a written exam in which candidates had to compose a menu made up of dishes that used pork, chicken, egg, fish, kale, potato, and tomato. Then they moved on to part two: cooking a dinner of eight dishes in only two hours. For Li Li it was no sweat. In two hours she turned out six cold dishes, eight hot dishes, one soup, and one dessert. Her dishes were classical Imperial cuisine and the judges were blown away. She won the prize, hands down, leaving her nearest competitors in the dust. After the contest, hundreds of reporters descended on the Li family’s three room apartment down at the end of an alley and none of them could believe that no one in the family was a professional chef. This was real Chinese cooking, this was a living link with the nation’s glorious past, and everyone wanted them to open a restaurant. But in Communist China of the 1980’s that wasn’t such an easy task.

In April, 1985 the Li family applied for a business license and one month later they converted Li Li’s bedroom into a dining room that contained one table. Li Shanlin and his wife did the shopping every day, while Li Li became the head chef, sharing the duties with her older sister, Li Aiyin. Li Xiao-lin, their brother, collaborated with them on composing the cold dishes while their younger sister, Li Ping, and Li Aiyin’s husband, Li Wang-xiang served the table.

Their first guests were strategically chosen. Realizing that they needed political protection to survive, the Li family invited officials from the Ministry of Health to their restaurant. These government apparatchiks were impressed by the remarkable food, unlike anything that was available at the time, and when they went back to the ministry the word spread through the halls of power that there was one great restaurant left in Beijing. Soon the restaurant was flourishing, protected by the Party officials who flocked to its simple, undecorated room and sat at its one round table to enjoy a forgotten cuisine. Its fame spread far and wide. Bill Gates came, Muhammed Ali ate there, David Rockefeller was a guest, pretty much every single foreign ambassador. Even Pu Jie, the younger brother of the last Chinese emperor, came to eat there, desperate to taste the Imperial dishes one last time. He was so moved that he wrote the sign for the family that read “Li Family Cuisine.”

In 1991, Li Li and Li Xiao-lin went to Australia to open a branch of the restaurant outside of Melbourne but Australia wasn’t ready for it, and the restaurant didn’t do well. But their other ventures succeeded grandly and they soon had branches open in Tokyo, Shanghai, and Tianjin, while keeping the original family restaurant (now expanded to all four rooms) open. Florence Fabricant visited in 2001 and wrote an account of dining there, calling it one of the best restaurants she tried while in China. The menu now combines dishes that Li Shanlin and his daughters added to the menu, his own variations on Imperial cuisine, and classic Imperial dishes.

The entire family works in the restaurant and cooks in the kitchen, but it should never be forgotten that if Li Li hadn’t won that cooking competition, going up against thousands of professional chefs, her family would never have opened their restaurant and Imperial cuisine would be a dim memory limited to a handful of people. So if you ever feel like one person can’t make a difference, just remember that in two hours Li Li saved herself, saved her family, and saved an entire nation’s cuisine.