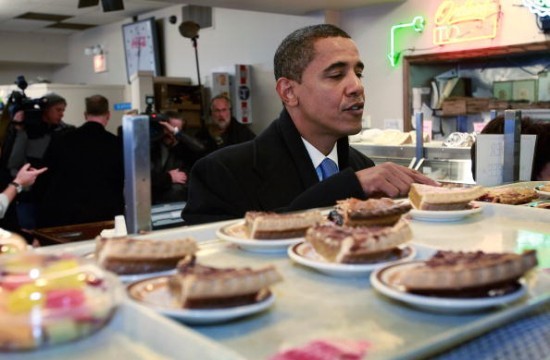 Obama Foodorama: It’s well known that Barack Obama occasionally dabbles in pies (when Michelle lets him), but an old Occidental classmate’s mother revealed that during his freshman year of college, she introduced the would-be President to a coconut chiffon pumpkin pie one Thanksgiving. (What you don’t know: the FBI is suppressing the story about what happened after, which concerns some embarrassing personal secrets involving pie.)

The Guardian: After seeing his endorsement boost the sales of Cristal, Hennessy, and Maybach convertibles, white truffle producers in Italy are hoping that Jay-Z’s recent Trufflepalooza — where he spent €15,000 to eat three kilos of truffles — will do the same for them. Paisanos, you have to understand how these things work: people only spend money on things Jay-Z raps about, and unless you’re hoping he raps about feeding Baby Blue Ivy white truffles, you’re gonna be out of luck for a while.

First We Feast: Andrew Zimmern reveals the dishes that changed his life, from his earliest food memories to the flavors that inspired him to eat bizarre foods. Conspicuously absent among them: fermented shark.

Zap2It: Speaking of compulsive workaholics, Alton Brown reveals that he stopped doing Good Eats because the work he put into its production “nearly killed” him. “For 13 solid years,” he revealed, “I spent 80 percent of my waking hours on planet Earth either thinking about, researching, writing, shooting or editing ‘Good Eats.'” But really, with the innumerable Food Network shows he’s judging nowadays, has he actually slowed down?

Grub Street: This is totally a thing for millionaires, but if you, say, have $250,000, ten friends, and a deep love of tequila, tips@mediaite.com