Last Call: Is The Rising Price Of Leafy Greens Hurting Your Wallet? Lettuce Help You

Last Call: Is The Rising Price Of Leafy Greens Hurting Your Wallet? Lettuce Help You 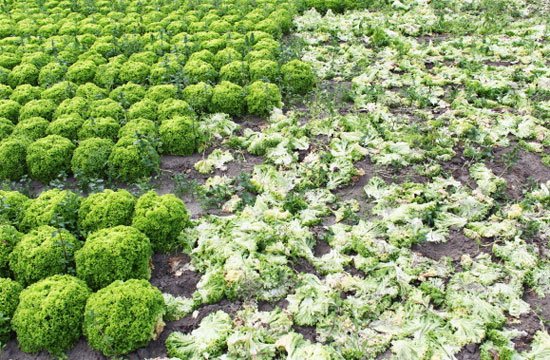 The Huffington Post: Thanks to a global warming-induced cold snap in the West Coast and Southwest, the price of all of those leafy greens, cauliflowers, and broccoli you love will rise by 10 to 20%. What will also rise by 20%: lettuce-based puns like the one above. Lo siento.

LA Times: An Irish food safety watchdog group found that burgers from a particular meat processor contained horse DNA — yes, there was horse meat in the burger. How did this happen? Did an Irish butcher get so drunk that he mistook a horse for a cow? We know nothing.

Kickstarter: Everybody! Go throw money at Homaro Cantu so he can make a webseries about innovation and paradigm shifts and technology and miracle berries! Do you have a mind? It’s probably going to explode from all of the world-changing knowledge in this video. You might not even be prepared for the insanity. (He wants to be a celebrity chef SO BAD, guys.)

Grub Street New York: After a truck broke down in southeast China, volunteers were stunned to discover that it was transporting 1,000 cats packed in bamboo crates, most likely to be served in restaurants. The cats were all thankfully rescued, unlike the horse.

Mountain X Express: Friend Of The Braiser Justin Warner goes on his first trip to the South (specifically, Asheville, SC),  where he is forced to apologize for exposing the town’s brilliant restaurants by potentially featuring them on his show. Oops, we may have facilitated its overexposure by mentioning this story. We’re still friends, right?