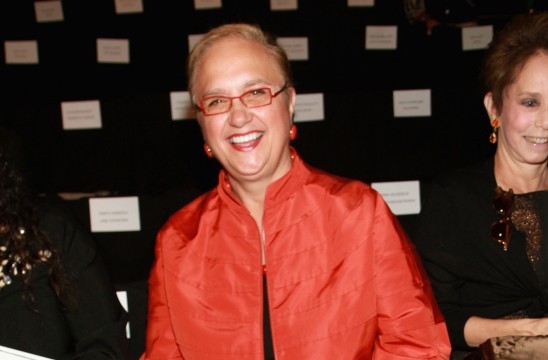 When the James Beard Foundation began planning for a dinner celebrating the very few women prominent in the restaurant and culinary industry, Lidia Bastianich was, quite likely, high on the list. Many know her accomplishments — starting and owning many of the country’s best Italian restaurants, producing and starring in her own television series on PBS, and raising the menacing Joe Bastianich — but few know about how she managed to grow in stature during a time when the culinary world was still largely ruled by men. She shared her perspective on her own career with us before the event.

You started your first restaurant in the early seventies. Did you find it difficult as a woman to start then?

Lidia Bastianich: I had Buonavia in ’71 and Felidia was in ’81. And I think what was a little bit easier for me was that my husband was in the front of the house, and I was the back of the house. But as far as recognition, as far as doing events, and as far as being treated by the white toques of the industry, I was always shunned, yeah. I didn’t take it too personally, because I had a different message [of comfort] …but absolutely. There was a definite separation, and difference…you felt that you were outside as a woman.

Did your appearances with Julia Child change what you experienced in the industry at all?

Julia Child — we became friends because she asked me to do a few shows with her… my TV persona, my communication with the readers through my recipe books, and all that, all based on Julia Child. What I learned from her — what did I see in this woman? Whereas the other chefs were all about, “What can I do? I can do this, I can do that–“

“Look at my fancy skills!”

Exactly! “Look at this!” And she was so personable, and about conveying the message, and having people do what she loved so much. So I said, “This is what really, cooking is all about!” It’s transmitting, if you will, the comfort; giving, empowering people, and telling them, you know, you can do it! And, I think her greatness lies in that. That’s what she did. My television show — now it’s been, what, 14 years that I’ve been on television? — my seven books, they’re all based on those premises. It’s about the simplicity, you know, getting things done as simple as possible, but deliciously; with the consciousness of the environment, of consciousness to nutrition, of consciousness to diet, you know. What is the service of food? The service of food is to nurture, to please, to nourish. So I think she was cognizant of all that, and I feel that I owe a lot to her.

You have to admit, though, that did shape your image as the “kindly old Italian grandmother,” who comes into your kitchen’s television and teaches you how to cook. But at the same time, you’re a very successful businesswoman with a multimillion-dollar brand name. Has that image ever come into conflict with what you’ve tried to accomplish as a businesswoman?

No. I think, maybe, it has shut some doors, the “hip” or whatever, but I think that what it has done, it has really set me as a stable staple. And people will open their doors to me, because after all, I am a grandmother of five grandchildren, two children. I started in the restaurant industry when I was 22, so I’ve had quite a long tenure, if you will. So has that motherly [image hurt me?] No, because my message was about cooking good food — Cook Italian food! it’s simple food! — conveying that the real cooking…it’s not the science or the breaking down of the components, it’s about what the real food is: the culture of the Italian people.

One of the biggest themes this evening is mentorship, and how women who’ve made it can help the up-and-comers. Have you mentored young women, either as chefs or as businesswomen?

Where are they now?

They’re all over, all over the United States. There’s, uh, Gina DePalma, there’s, um…They’re all over the United States, but you know, the one thing: they opened one restaurant, you know, not big restaurants, and that’s the problem that we’re discussing: why? why not? They’ve held culinary positions…So I think that’s one of the most rewarding, if you will, relationships, when you’re — I think there comes a time in one’s life where mentorship really takes blossom, if you will. I think along the way you take women along with you, and work with them alongside you, but to really mentor and set up a woman and send her off, that takes a little bit more to do, and I do a lot more of that now.