Why Is The Government Banning Trans Fats?

LIST: What’s Going to Happen to Your Food When The FDA Bans Trans Fats? 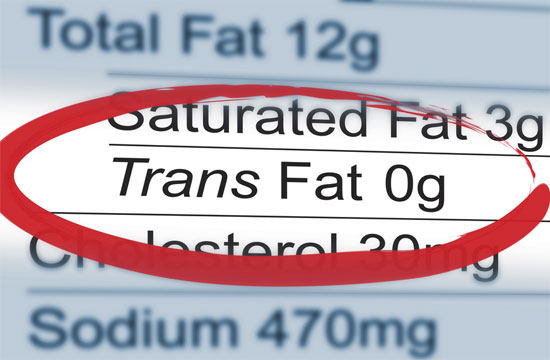 Today, the Food and Drug Administration took the first step towards banning trans fats from the US food supply. The FDA has already mandated that food companies list the amount of trans fats in their food, but according to CNN, the partially hydrogenated cooking oil is “no longer generally recognized as safe.” Though it might take a few more years, the FDA will eventually eliminate trans fats from, oh, all of the greasy foods that Americans love.

Is this terrifying? It might be! But don’t worry, we’re here to hold your hand during these trying times, and will explain how good or bad this entire trans fat thing is.

So what is a trans fat, anyways? Is it a fat with gender issues? A trans fat is 1) not human or gendered, and 2) the common name for an unsaturated fat with an extra trans-isomer fatty acid (hence its name).

Are those science words? Yes, yes those are science words. They mean that the fat molecule has a double carbon bond, which — oh, it’s super complicated. The important thing is that trans fats are the terrifying Frankenstein baby of hydrogen plus vegetable oil.

Ew. That sounds like an nuclear oil bomb. Well, yeah, but for decades, food companies have been creating trans fats in order to keep fried foods shelf-stable, without feeling greasy. Without adding hydrogen, vegetable oils more likely to destabilize and go bad, which is gross and no one wants to deal with that. Especially with Pringles.

Wait, a stable fat that doesn’t feel greasy sounds great. I love Pringles. I do too.

What else are trans fats in? I’m glad you asked! They are in a lot of things, such as:

So why is the government getting all up in my chips? Because trans fats — even marginal amounts, like 3 grams per day — are terrible for your heart and can kill you.

Can’t everything kill you, though? Like, isn’t twerking dangerous for your back? Can’t Instagram tell axe murderers where you live? STOP INTERRUPTING ME WITH YOUR NONSENSE. A literal mountain of research indicates that trans fats and saturated fats are far more likely to cause high cholesterol, clogged arteries, heart problems, and diabetes than other types of fats, such as monounsaturated (olive oils, nut oils, etc.) or polyunsaturated fats (safflower, canola, and grapeseed oils).

Wait, waitwaitwaitwaitwait. If un-saturated fats are great, then why are you hating on trans fats? You said, literally six paragraphs ago, that a trans fat is an unsaturated fat. I did, didn’t I? Well, then, let me hit you with a little bit of Harvard University. KNOWLEDGE’d:

Trans fats are worse for cholesterol levels than saturated fats because they raise bad LDL [a type of dangerous cholesterol that clogs arteries] and lower good HDL [the better cholesterol that prevents heart disease]. They also fire inflammation, (30) an overactivity of the immune system that has been implicated in heart disease, stroke, diabetes, and other chronic conditions. And they contribute to insulin resistance. (26) Even small amounts of trans fat in the diet can have harmful health effects. For every extra 2 percent of calories from trans fat daily, the risk of coronary heart disease increases by 23 percent. Eliminating industrial-produced trans fats from the U.S. food supply could prevent between 6 and 19 percent of heart attacks and related deaths, or more than 200,000 each year. (31)

Yeah, that’s right. Trans fats will literally crawl into your heart and make you die.

AAAAAAAAAAAAAAHHHHHH. It’s all right. Get it out of your system. Scream into this bag that once held doughnuts in it.

Yeah, I’m fine now. But wait, maybe I should take my chances with trans fats. That’s a terrible idea, as the 34% of adult Americans who are obese and 11% of adults with diabetes can prove to you.

But what’s going to happen to the chipmakers? The deep-fryers? The backbone of American industry? Won’t they just crumble into the dust? They’ll be perfectly fine. In 2006, New York City became the first city in the world to ban trans fats from restaurants outright — not just from mom-and-pop restaurants and small businesses, but also from giant chains like KFC, McDonald’s, and Burger King. But within five years, the average New Yorker’s consumption of trans fats fell from 2.9 grams per fast food meal to less than 0.5 grams per meal, a “negligible” amount according to the city’s Department of Health. And the best part: no one noticed or cared.

I smell a nanny state.  Yeah, we know, Michael Bloomberg made them do it. But the initiative was so successful that many of the chains decided to remove trans fats from their restaurants nationwide — and they did it willingly. It’s not hard to imagine other companies doing so.

Oh. No wonder McDonald’s fries don’t taste like soybeans and granola. Right! They use a soy-canola blend to fry their food, which is Super Good For You (or at least better than trans fat nightmares.)

How long do I have left to frolic in a world of trans fats? A while, considering how slowly the FDA moves in regards to everything. Right now, they’ve opened up a 60-day comment period, which is when they ask companies to tell them (in very scientifically accurate terms) why trans fats aren’t bad for you. They will probably not say that. And then they have to establish the rule itsef. In addition to allowing companies time to phase out their use of trans fats and add substitutes, we’re probably going to see the elimination of trans fats in less than two years.  So if you’re not afraid of death by heart attack, go eat one of these Big Catch meals at Long John Silver’s while you can. They have 33 grams of trans fat per meal!