Lobsternomics: This is Why We Can’t Have Cheap Lobster 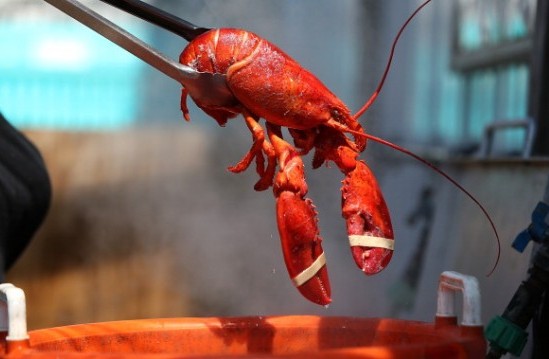 If you’ve been following lobster news lately (and you should, since it is The Most Pressing Issue Of Our Time; whatever, Egypt), you’ll know that thanks to warmer waters, lobster populations have exploded in the past year, and the price for the sea bug’s hit a 20-year low. But why is it, The New Yorker wonders, that the legendary lobster glut — leading to legions of worried Maine lobstermen and New England supermarkets selling the pricey crustacean for $2.20 a pound — hasn’t led to cheaper lobster throughout America?

Short answer: because restaurants can make a lot of money by convincing everyone that lobster is still Rich People Food.

Longer, more nuanced answer: while practicality dictates that restaurants should prevent people from becoming accustomed to cheap lobster (and rebelling if the lobster population crashes, driving prices up yet again), chefs and restaurants realize that psychologically, people still conceive lobster as a luxury good (even though it used to be fed to colonial prisoners, who called it “inhumane”):

As with many luxury goods, expense is closely linked to enjoyment. Studies have shown that people prefer inexpensive wines in blind taste tests, but that they actually get more pleasure from drinking wine they are told is expensive. If lobster were priced like chicken, we might enjoy it less.

Heck, even if restaurants threw cheap, market-value lobster at us, we’d still refuse to eat it — unless it was, say, buried in mac-and-cheese:

Since most customers don’t know what’s been happening to the wholesale price of lobster, cutting the price could send the wrong signal: people might think your lobster is inferior to that of your competitors. A 1996 study found that restaurants wouldn’t place more orders with wholesalers even if lobster prices fell twenty-five per cent. As the study’s authors put it, “A low price creates suspicion.” This helps explain one of the interesting strategies that restaurants have adopted to take advantage of the lower price for lobster: they keep the price of lobster entrées high, but add lower-priced items—lobster bisque, lobster mac-and-cheese, a lobster B.L.T—to the menu. That way, they can generate more business without endangering lobster’s exclusive image.

RELATED:
WATCH: Lobster Feminist Richard Blais Reminds Us Why Female Lobsters Taste Better
What The What Is Going On With These Psychedelic Lobsters?!
Happy Belated Halloween: This Very Festive Lobster Wants To Keep The Party Going