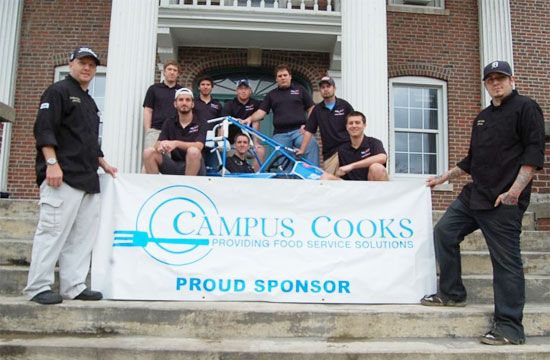 Catering to college frats may not be the most glamorous or prestigious job, but when a college catering company gets written up in Bloomberg Businessweek, there’s only one possible rationale: college catering is making bank.

Just look at the case study of Campus Cooks, a catering company whose entire client base is made of fraternities and sororities, and offers to feed college students catered, fresh, carefully sourced food that is not frozen pizza and leftover bong water. With 70 cooks on 20 campuses, the company’s projected to make $13 million in revenue next year — which is not bad at all for a company that serves chicken quesadillas with pico de gallo. (The fact that they charge between $2,000 and $4,000 per frat bro/sorostitutes per school year certainly helps with the profit margins.)

But before you throw off your toque, swallow your dignity, and make hangover omelettes for the rest of your life, you’ll need to understand your audience first — and if you don’t have the kitchen-burning, pledge-hazing frat experience of founder Bill Reeder, ain’t no frat in the country gonna listen to you blather about sustainability and cultural fusion and bug-eating:

After graduation in 1995, Reeder opted for a career on Wall Street. But the long hours wore him out, he says. So in 2004, with some money from his parents and a bank loan, he paid $200,000 for the same catering company that had fed him and his fraternity brothers. He then began sending out letters, cold-calling, and visiting fraternities and sororities to drum up business. The quality of the food got him in the door, Reeder says, but it was his understanding of Greek life, and the role of frat houses as modern-day eating clubs, that closed the deals. “We’re trying to create an atmosphere and experience,” he says.