Magnus Nilsson and Nathan Myhrvold Duke It Out In WSJ 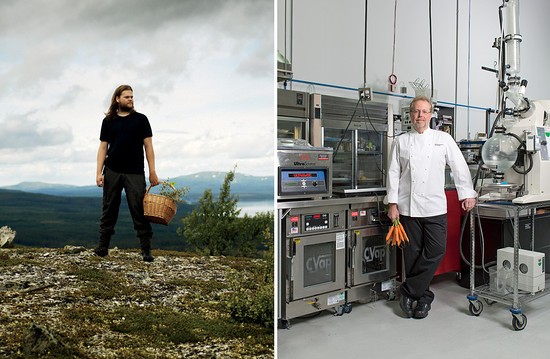 In one corner: Nathan Myhrvold, former CTO of Microsoft, cofounder of Intellectual Ventures, solver of problems like global warming and hurricane devastation, and chef/author of Modernist Cuisine, representing Team Science.

In the other: Magnus Nilsson, stumbling out of the Swedish woods where he’s been foraging for weeks (figuratively), whose restaurant Fäviken Magasinet serves very, very, very local ingredients, and whose new cookbook Fäviken advocates the exact opposite of Modernist Cuisine, representing Team Nature.

What happens, then, when the Wall Street Journal Magazine gets the two to debate, crashing their philosophies against each other? Because these men are polar opposites in their beliefs — yin versus yang, Apollonian vs. Dionysian, Paula Abdul vs. MC Skat Cat:

What are the basic tools to own?

Nilsson: Good stove, oven, fridge, knife and frying pan. In most people’s homes, one of these is almost always missing, even though there are all kinds of fancy gadgets around.

Do you approve of improvisation?

Nilsson: When cooking the way I describe, it doesn’t matter whether a spoon contains 8 or 14 milliliters—just pick a spoon that seems right and go for it. This difference will make the dish your own.

Myhrvold: Precision is critical. With our bacon mayonnaise, if you overshoot the amount of bacon, no big deal, but if you inaccurately measure out the 0.7 grams of Xanthan gum, you’re going to have a problem.

The rest of their philosophical debate can be found below.