Man Cuts Cronut Line by Claiming to Be A Cop 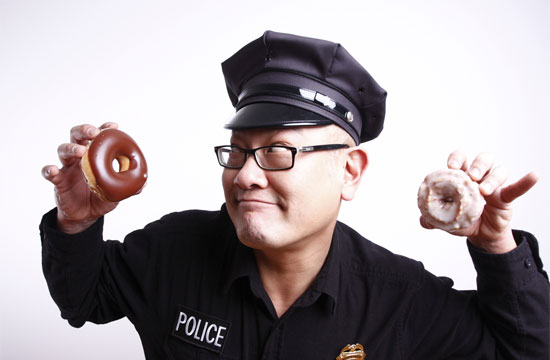 Let’s go through some cop stereotypes. Cops love donuts, and cops love abusing their authority in ways the general public finds despicable. Right? Totally reasonable assumption to make about cops! And this is why an unknown man decided to cut the Cronut line at Dominique Ansel’s SoHo bakery, while dressed as a cop. Ain’t nobody got the time to be subjected to a stop-and-frisk from a cranky cop who just wants a cronut.

Except he forgot one thing: this is the line of Dominique Ansel, who may be French, but has a security team with the efficiency of Germans. As DNAinfo reports, the security guard threatened to call the cops on the fake officer:

“A customer simply cut in line (as some people do), and so we asked him to please return his purchase as it prevented people waiting in line from their fair share, which he refused,” a bakery representative wrote in an email to DNAinfo New York.

“The guy claimed he was a police officer, and so the security guard [called] the police to check,” the representative continued. “At that point, the guy walked away.”

While impersonating a police official is a crime throughout the world, the bakery admits that mayyyyybe the guard shouldn’t have called the cops on the cronut con man. “It was a bit immature, and we’ve already spoken to the company that provides our security services to let them know that the security guard overreacted.”

Overreacted? We think this man did his duty, for if people could walk, willy-nilly, to the cronut line claiming that they were figures of authority that deserved cronuts, society would crumble and we’d resort to cannibalism. (A liver punched in a doughnut shape is an acceptable post-apocalyptic cronut.)

RELATED:
Cronut Nadir: Two Women Spotted Digging through Trash for Cronuts
Waiting In Line For Cronuts, As Told By A 10-Year-Old Boy
There’s a Donut Exhibit Opening In New York City, Which Delightfully Snubs the Cronut