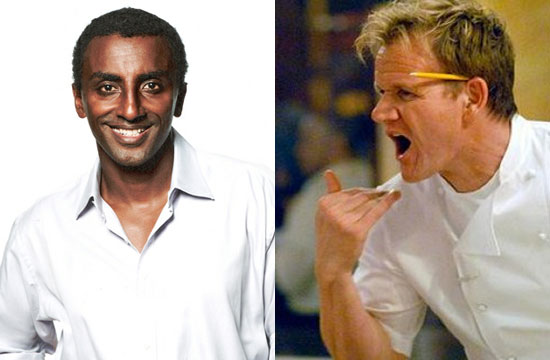 When it comes out on June 26th, Marcus Samuelsson’s new autobiography, Yes, Chef, will probably recount an unusual childhood, his ascent into culinary superstardom at Aquavit and Red Rooster, and an eclectic, fascinating life. But the part that people are talking about — especially Eater — is the story about Gordon Ramsay going off on Samuelsson for a perceived snub, and being not particularly PC about it.

Samuelsson recounted an instance when a reporter asked him about his favorite London chefs, and, due to an earlier encounter that left Samuelsson “almost embarrassed” for Ramsay, decided to quietly leave him out of his list. Problem is, you don’t ignore Gordon Ramsay:

On my second day, I was cooking when a phone call came into the kitchen. The executive chef answered and, with a puzzled look, handed me the receiver. Trouble at Aquavit, I figured. I put the phone up to my ear, expecting to hear Hakan’s familiar, “Hej, Marcus.”

Instead, there was screaming.

“How the fuck can you come to my fucking city and think you are going to be able to cook without even fucking referring to me?”

This went on for what seemed like five minutes; I was too stunned to hang up.

“I’m going to make sure you have a fucking miserable time here. This is my city, you hear? Good luck, you fucking black bastard.”

And then he hung up.

Samuelsson coolly ignored the part where Ramsay called him a bastard, though he was understandably “unsettled” by the black part. But there’s an eloquent way to state that “haters gonna hate,” and to his credit, Samuelsson does just that:

Restaurant kitchens will always have an element of playground justice to them. Big guys will pick on little guys, and new kids will be teased for whatever makes them stick out from the rest. If there’s a weak spot, somebody will find it. Up to a point, that kind of bullying is built into the hierarchy of the kitchen; as an underling, you deal with it or find a different job.

But what I finally realized in London was that I wasn’t an underling anymore. I didn’t have to take that kind of bullshit. There was no action I needed to take; I didn’t need to talk things through with Gordon Ramsay and come to a kumbaya moment. In the years since, I haven’t felt a need to make myself available when a mutual friend brought Gordon into my restaurant, or go out of my way to be his friend. I have better things to do.