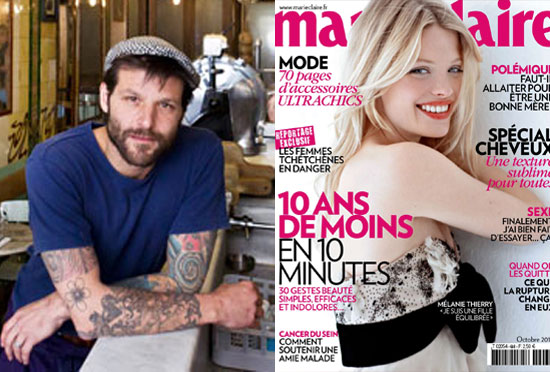 The French version of Marie Claire is furiously backpedaling after a Paris chef revealed that one of its top editors requested a comped meal from his restaurant, then threatened to pull a favorable review after the chef refused.

French food blog Food Intelligence was forwarded the entire email exchange from chef Pierre Jancou, whose acclaimed restaurant Vivant would have been featured on a list of Marie Claire general director Jean-Paul Ludot’s favorite Paris restaurants — that is, if Ludot could make sure that the restaurant was really as good as he remembered, so if he could just come in for free one night with a plus-one to “test” the menu again, that would be totally awesome.

Since we do not speak French, we’ve relied on Eater’s translations.

“I’ve never invited a journalist in 24 years of a restaurant career,” Jancou replied. “Your approach seems shady and fraudulent.”

Ludot (whose background is in fashion) responded that his request was not only reasonable, but industry standard, and that he found Jancou’s refusal of his request to be “insulting.”

It was that insult which pissed off Jancou:

If you have the habit of inviting yourself to a restaurant, to me, you’re absolutely not a food writer. If you stick with fashion, it would be better for everyone.

Oh non il n’as pas fait cela! This was too much for Ludot, who pulled out the “I’m the editor and CEO of Marie Claire” card and accused Jancou of being the “only one to react this way… and in such an aggressive manner”:

The others well understood that this was an opportunity to put their restaurant forward in a big magazine. And they, naturally, hoped to set up a friendly moment to talk… You didn’t understand anything and all you have done is confirm your stinginess well known in the circle. This exchange is now over. You have made me waste my time.

Most food writers — even us Braiser Ladies, who are not technically food writers, but we’re close enough — know better than to demand comped meals from chefs in exchange for coverage, which is why this story is so shocking. Marie Claire was equally as shocked and issued a formal apology, and Ludot did so as well.

“This does not at all correspond with the practices and values of the Marie Claire editorial staff and the other magazines in the Marie Claire group,” he wrote. Complete 180 there, monsieur.