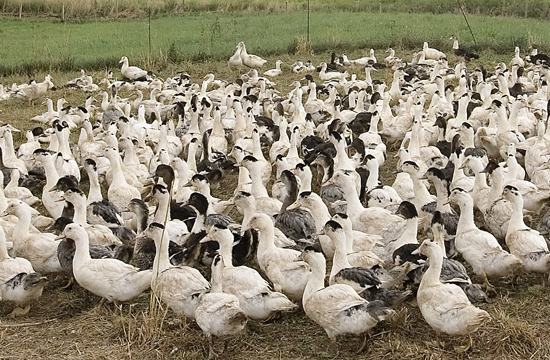 No truer words have been spoken about California’s recent repeal of the controversial foie gras ban, until Mark Bittman decided to write a New York Times op-ed about it.

In it, Bittman argues that between foie gras, white truffles and caviar, foie gras is the natural go-to for chefs and a**hole foodies because it’s well, the cheapest of the 1-percenter foods. So why get in on all the foie madness? From Bittman:

… Foie gras is among the most overrated of luxury ingredients, ranking right up there with caviar and truffles. Done right, all three are delicious, but we can call them rich people’s food, and as such they’re not that important except to chefs who want to impress rich people or rich people who want to be impressed. …

Foie gras is not only available at relatively moderate prices (you can buy it now for something like $50-$75 a pound), but it’s also never out of season and produced domestically. And it’s a showpiece: Most chefs cook it not because they love it but to appeal to food snobs, who can report, “We went to XX last night and had the most amazing foie.”

So sure, you’re basically a d*ck if you really want to be a glutton on foie gras all day, every day. But foie gras is much more than just rich people foods. Bittman says the argument against foie gras is far more substantial than just ducks and geese being force-fed — it’s a matter of principle for the entire meat industry. (It’s the same argument that many chefs, like Jenn Louis in Portland, have been making for years.) Should one kind of meat have to be labelled as inhumane, he argues, then so should the other kind of factory-farmed meat which we’ve all grown accustomed to.

If it’s ultimately and legally determined that foie gras production is cruel, inhumane or both, labeling it so would strengthen the argument that so are the current means of production for most industrially raised animals (and their products). This is best seen as a test case, not as a significant defeat or victory. Foie gras itself just isn’t that important.

Many still argue that inhumane foie gras production makes up a very tiny percent of foie gras being served in your fancy restaurants; naturally, Californian restaurants have been clamoring to serve up that foie. PETA will still be lurking in the background for the next chance to bite, we think.