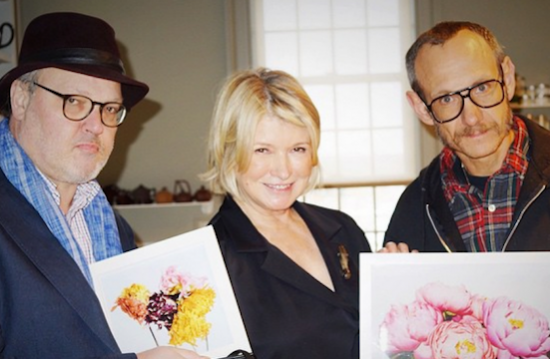 We were in too much of a turkey-induced coma this last weekend to realize that our domestic goddess, when she wasn’t bashing Gwyneth Paltrow with pun-tastic pies, spent her Thanksgiving Day with noted alleged pervert Terry Richardson. But God forbid if you call her out on it.

The somewhat clueless Martha Stewart posted a photo of herself with Richardson and another photographer, Todd Eberle, at her Thanksgiving. The caption of the since-deleted Instagram: “Todd Eberle, left, Martha, and [sic] terry Richardson , right at my farm on Thanksgiving Each brought me an extraordinary flower photo!”

Because flower photos make up for everything.

The Daily Mail also made a note of who else was in attendance:

Loads of Stewart’s followers began posting comments against her choice of guests, and now the Instagram post is gone. Now the only photo that remains from the dinner, mentioning other “photographers” that were there, is one of a rando.

This is Douglas Friedman who took some of the recent photos I have posted four photographers came to the farm for dinner !

Clearly having her photo taken by Richardson wasn’t enough to maybe make Stewart question some of her choices.