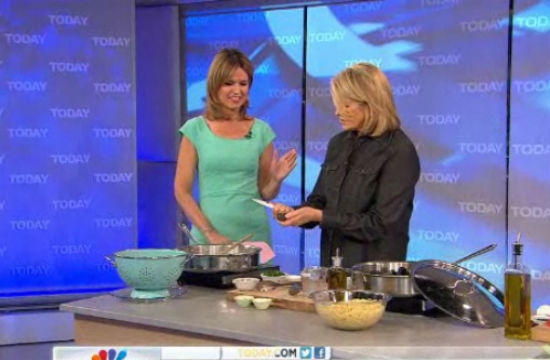 While we found Savannah Guthrie turning her nose up at Fergus Henderson’s Michelin-starred blood pudding at the Olympics earlier this summer to be at the height of disrespect (compounded by her discouraging the US Women’s Field Hockey Team from eating it when they were clearly excited to taste), we understand that pig’s blood can be a somewhat adventurous food and that it isn’t for everyone. (Although, as a journalist, it’s kind of your job to be a polite guest in your host countries, but whatever, it’s fine.)

On this morning’s Today, however, she proved that she actually just has the palate of a small child in its pasta-and-butter-only-please phase. Martha Stewart appeared to do a segment on festive end-of-summer/Labor Day meals for the family, and, unfortunately for Savannah, it was filled with such oh-so-exotic, icky things like mussels and figs.

“Do you like mussels?” Martha asked as she prepared a beautiful dish of pasta with mussels sauteed in white wine.

“…Yes?” Savannah replied with a grimace after a pregnant pause. “A little bit?” Nice effort. And while Martha was demonstrating how to tell whether a mussel is good to cook (shells open/cracked = they’re dead, don’t poison your guests, etc.), Savannah got squeamish about the mussels’ “beards” and said she would never buy those.

…Well, sweetie, then you’re probably just going to buy clams. Because all mussels have beards. You pluck them off with a knife, like Martha showed you.

By the time we got to dessert — a lovely cheese plate with tasty accoutrements like figs — Savannah basically revealed that she would never be a guest at Martha Stewart’s Labor Day party.

“Not really, to be honest,” Savannah dully replied.

Martha insisted that she must come to her house for dinner one night to get over her various food phobias, which, to be honest, was more than Savannah deserved for wrinkling her nose at Martha’s lovely meal. Please accept, Savannah. We want you to make a full recovery and join us in the land of Enjoying The Tasty Things In Life.