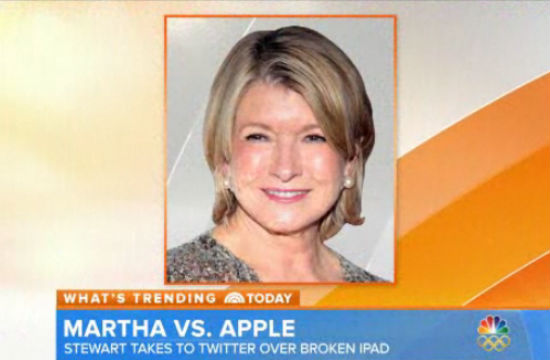 Gawker sort of notoriously does this thing which tickles us, where, if the subject of a story emails a particularly strong-worded response to the post, they turn around and publish the letter of complaint in its entirety for the internet at large to mock. Martha Stewart is really upping her cool grandma game by following their lead.

Apparently, she dropped the very iPad that Steve Jobs himself once gifted her earlier this week, shattering the screen. Martha posted the following series of tweets, allegedly light of heart, to vent her frustrations:

I just dropped my iPad on the ground and shattered two glass corners. What to do?does one call Apple to come and pick it up or do I take it?

I am still waiting for an apple rep to come pick up my IPad. No action yey

Maybe I have had a good entrepreneurial idea? Apple Now? Like same day delivery from Amazon? I think I am on to something. Same day fixit!!!

Apple’s PR appears to have reached out to Martha’s team with some sort of terse complaint about her putting them on Twitter blast, which upset them, considering Martha Stewart Omnimedia and Apple’s longtime working relationship. And Martha’s just all, can’t anyone take a joke?

So is it time to put out the fires and admit I was just pissed off at the fact my precious ipad shattered and I wanted to make light of it??

i cannot believe that Apple Public Relations is mad at me for tweeting about my Ipad and how to get it fixed! steve jobs gave it to me!

i wish i could explain everything here on twitter about the broken IPad, the stolen IPhone, the silly joke about repairs and my frustration!

Let's now talk turkey: Ipads addictive,awesome,expensive. Glass should /could be unbreakable. That the iPad works with cracked corners-great

But the cracked glass is sharp and can cut. I was just upset that I(someone)was clumsy and let the iPad fall out of the car. To fix is time

She called into The Today Show this morning to straighten out the mess and, once again, insist that she was kidding about Apple showing up at her doorstep to fix her iPad. Guys, Martha Stewart is demonstrating increasingly millennial levels of obnoxious self-awareness and we are impressed.