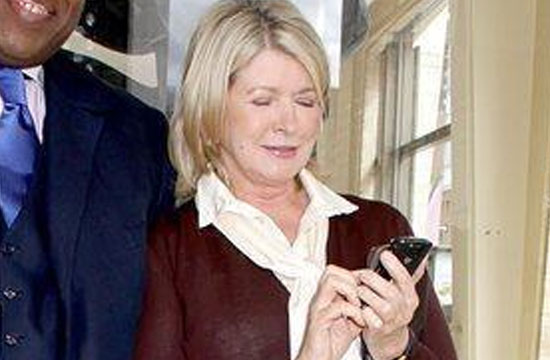 Instead of posts about television appearances, blog posts, photos of her recipes, and inevitable “Send me photos of my recipes that you cooked!” solicitations, some strange tweets appeared about that word that most of America hates:

Yolo is actually up for “word of the year”. Will my ipad version of scrabble accept that?

Martha also took some cute XMas photos into the photo booth with her BFFs:

here i am celebrating with the mso retail team at my company party. we loved the @smilebooth photo booth #smilebooth! twitter.com/MarthaStewart/… — Martha Stewart (@MarthaStewart) December 23, 2012

And, like many an overly dramatic pre-teen, discovered the attention-grabbing powers of the ALL CAPS BUTTON:

WE HAD A WONDERFUL EMPLOYEE LUNCH TODAY- FARM EMPLOYEES- AT THE BEDFORD POST-ONION SOUP,MUSSELS,HAMBURGERS,PANNA COTTA,CHEESECAKE- FUN!

it is so passe to think that tweeting in CAPS IS YELLING??? who made up that rule? i justlike how it looked – it got your attention!

HuffPost speculated that this was probably the work of the poor intern tasked with running Martha’s Twitter account. This is likely true, though there is also the possibility that Martha got Freaky Friday’d.

(Side note from Perez Hilton: “I love that you spelled out #YOLO, Martha! Ha!”)