WATCH: Booted MasterChef-testants Enter ‘The Culinary Thunderdome’ For Most Dramatic Episode Ever 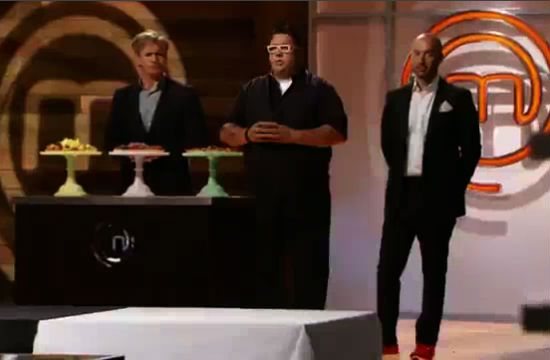 Getting a chance to win your white apron back after being shamefully booted from the MasterChef kitchen is totally a big deal. However, Graham Elliot and friends (read: producers) perhaps went a touch overboard with one cheftestant’s redemption song. The last 8 chefs who had been kicked off the show were invited back to regain a spot among the final 6. After creating their own mystery box, Josh and Ryan were left as the two chefs with the most impressive dishes.

So, the two of them entered what Graham so boomingly announced as THE CULINARY THUNDERDOME, a.k.a. a place where you make fruit tarts. (Feel free to cackle when you watch that part of the clip; it’s comically melodramatic and we did, too.) They had to face-off in fruit tart baking with the remaining six cheftestants judging their finished product in a blind taste test to determine who would win back their white apron. This, of course, only encouraged Ryan’s already campy demeanor and led him to say things like:

“I’m expecting Bobby Flay or Jean-Georges to come walking through the door and then he drops the bomb on us that the six dopes upstairs are going to be judging my food.” (Sorry, Ryan, Jean-Georges had a prior commitment… oh, and he’s not A JOKE.)

“This is the biggest opportunity of my life.” (Because he lives in New York City and doesn’t have a job.)

“Culinary thunderdome: two men enter, one man leave.” (That is not a typo. Getting swept up in the pressures of culinary thunderdome sometimes makes you mess up the grammar of your own painfully rehearsed dramatic lines.)

Just watch the clip. (Oh, and for the record, Josh won his way back in.)