The Competition Gets Tougher on MasterChef Junior (VIDEO)

WATCH: The Competition Gets Tougher, Meaner (Ish) on MasterChef Junior 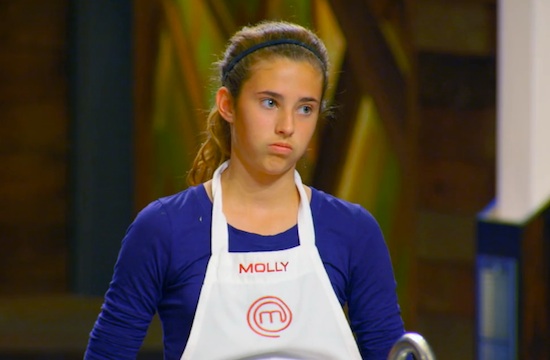 Well, despite all the lovey-dovey, feel-good, adorable moments from the premiere of MasterChef Junior, I sort of forgot — this is a real competition. And kids’ hopes and dreams were at stake. So this second episode of MasterChef Junior didn’t quite lend itself to the adorableness of last week.

You could tell that the kids felt the pressure too, as the judges toughened up ever so slightly. Don’t get me wrong, Gordon Ramsay and the team are still adhering to a very kind philosophy with these 9- to 12-year olds. But in the elimination round, the judges’ critiques of the dishes got sharper. “Will breakfast save you from elimination?” “Sometimes, it’s a risk that doesn’t pay off.” Joe Bastianich, ruiner of all dreams. Just kidding. (But seriously, he makes so much eye contact while chewing. It’s enough to make my stomach drop, and I’m not even cooking.) And the heartache when two of the competitors go home (spoiler alert towards the end of the post) feels genuine in a way that makes you believe you’re not watching a cutthroat competition.

That being said, there was still some adorable moments on this episode of MasterChef Junior, mainly thanks to the three main characters I fullheartedly nominate to have their own show: Hawaiian shirt-loving Jack, ruddy cheeks Alexander, and sassy pants Sarah. Seriously, these three need their own reality cooking show when all this is said and done. (And Dara, too — but I was going through some red bow deficits this episode. Where was our headpiece wearing chef-to-be??) The cuteness highlights of the second episode:

1. Jack: I definitely want to have a restaurant when I grow up… or be a wrestler.” Excellent career goals, young man.

3. Jack and Joe, again with the Hawaiian shirts! Bastianich asks Jack again about the Hawaiian shirts, to which Jack gives the ultimate kid response: “I don’t know, I just like them. They’re really comfortable.” Hawaiian shirts are to Jack as Crocs are to Mario Batali — a chef’s gotta have his thing.

4. Graham Elliot to Jack: “Do you like carpentry? Like, working with hammers and stuff? Because you NAILED it.” Then Jack’s reaction when he found out he won the first Mystery Box challenge, so flipping excited.

5. Jack knows how to work it with the judges. In response to Elliot’s comment on being “wise, old men,” Jack replies: “you look like wise, young men.” Way to flip it, Jack — that kind of flattery will get you far with the ladiez.

7. That’s Jack, as he watches his competitors cook below, holding a pineapple drink concoction. That plus the Hawaiian shirt? Dying. Let’s all speculate what he could be drinking. Are virgin Pina Coladas on tap for the winners of Mystery Box challenges?

8. Feud between Sarah and Jack! When Jack says Sarah looks like she’s in trouble, she retorts: “I don’t agree, Chef — and I’m telling Jack that I will remember that!” Seriously, TV EXECS GET ON THIS.

9. Alexander’s reaction to the judges — adorable. Sure, maybe his red rosy cheeks are hiding some fierce hatred for his competitors, but you can’t really tell. If anything, he seems so happy to have validation from the three judges.

10. Dara reassuring Molly, whose [SPOILER ALERT AHEAD] Korean burger flop sent her home: “Keep cooking, you’re going to do great.” You sort of forget that children, unlike adults, come into these competitions with no baggage, no underlying insecurities (we hope), none of the jaded “poor loser” attitude. These kids aren’t anxiously rooting for their competitors to doff their aprons and go. (Except maybe Jack. He’s in it to win it.) In fact, all the kids look genuinely upset to see their friends, Tommy and Molly, go home. That’s when you remember that not every kid gets to win a blue ribbon (or in this case, a MasterChef Junior trophy) at the end of the day. It’s almost startlingly refreshing to see a competitive reality show end without the competitors wanting to rip each others’ throats out. Will this cuteness continue? Or will animosity kick in as the show goes on? Everyone keep your hair bows on, it’s going to be a bumpy ride.