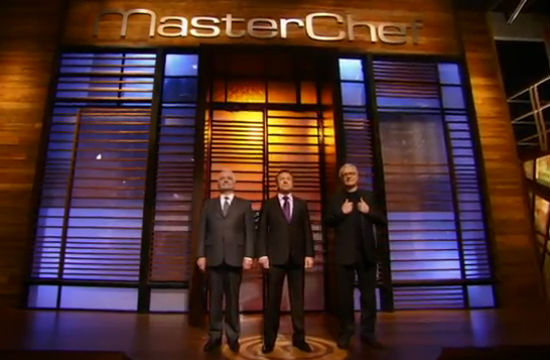 Thank goodness the final four cheftestants on Masterchef have come down to four pseudo-competent people. We would be embarrassed on behalf of Gordon Ramsay, Joe Bastianich, Graham Elliot, Fox, and America if someone like Tali was cooking for Daniel Boulud, Guy Savoy, and Alain Ducasse.

Oh, right, because three of the most legit, non-media-whoring celebrity chefs in the world are judging MasterChef tonight. An abomination? Pretty much. The reason restaurant chefs say they hate the term “celebrity chef”? Absolutely. Will we be watching with the same rapt attention we pay to Lindsay Lohan train wrecks? Duh.

If nothing else, MasterChef/Fox are masters of spectacle. They fly in the three “VVIPs” (Gordon’s words, not ours) in a private jet and intercut the sneak peek with footage of them deplaning in slow motion in impeccably tailored suits. It’s worse than David Beckham/Daniel Craig in the opening ceremonies. A handsome, rugged British spy Alain Ducasse is not.

Then, they’re introduced not in ways that highlight their own culinary achievements, but in ways that highlight Gordon Ramsay’s career. For example, Guy Savoy is hailed as Gordon Ramsay’s mentor; Alain Ducasse is introduced as one of only two men in the world who has more Michelin stars that Gordon. Are you freaking serious, MasterChef? How can you possibly make Gordon Ramsay the satellite around which three of the most critically acclaimed non-TV chefs in the world orbit?

Okay, we’re done with our strong words. Oh, except for the fact that the way Graham Elliot pronounces Boulud is totally hilarious. He kind of says it like “Baloo,” ie., yes, the bear from The Jungle Book. We get it: French is tricky, and the judges are trying to show off for the MasterChef-testants. But the widely accepted pronunciation of Daniel’s surname does not sound like a cartoon bear’s.

You know what? Just watch the clip below.