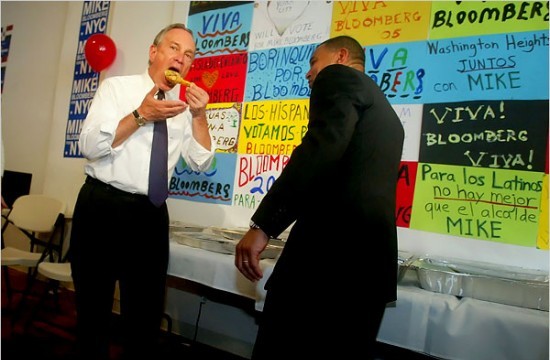 Yesterday on his weekly radio show, Mayor Michael Bloomberg finally weighed in on the Chick-fil-Gay-Marriage-Mapocalypse. And since he’s also a mayor who also happens to be one of the most banhammer–wielding mayors in New York City’s history, you’d think that he’d join his fellow big-city mayors in calling for a citywide ban of Chick-fil-A.

“You can’t have a test for what the owners’ personal views are before you decide to give a permit to do something in the city,” Bloomberg said, specifically referencing Tom Menino, Rahm Emanuel, and Edwin Lee‘s threats to ban the chicken chain from Boston, Chicago and San Francisco, respectively. “You really don’t want to ask political beliefs or religious beliefs before you issue a permit. That’s just not government’s job.”

At the same time, you can’t ever call Bloomberg anti-gay marriage: he officiated the first gay wedding in the city after the state legalized same-sex marriage, handpicked the publicly-out Christine Quinn as his likely successor, and directed the city this week to file a brief to the US Supreme Court arguing for the overturn of the Defense Of Marriage Act.