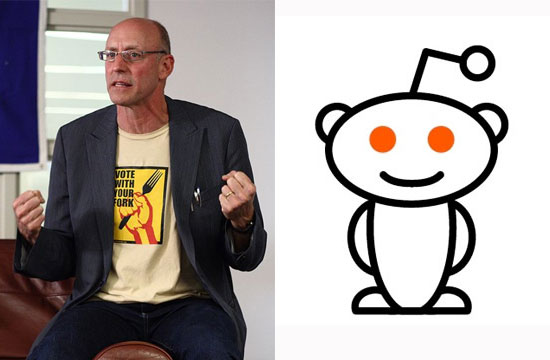 Yesterday, food writer Michael Pollan went onto Reddit’s Ask Me Anything subreddit to take questions from the largest community on the Internet, as well as to alert people to California’s upcoming vote on Proposition 37, which would require food companies to label foods with genetically modified organisms.

His fans — and his answers — did not disappoint:

Q: If we’ve been eating genetically modified food for 18 years, why are we finally trying to label GM’s now?

A: We’ve been trying to label GMO foods since we began eating them 18 years ago, but the industry has fought it at every stage– FDA, Congress, White House, state legislators. This is the rare opportunity, here in California, for the public to finally get heard on the issue.

Q: What, in your opinion, is the single worst food trend, or foodstuff, on American menus?

A: The trend of mashing up junk foods seems pretty bad: Tostidos [sic] and Taco Bell, that sort of thing.

And here’s what he has to say about celiacs:

Q: What do you think is causing the increase in gluten intolerance? (Or is it just a fad in the US – perpetuated by the big retailers and food companies?)

A: There does seem to be a real increase in both gluten intolerance and celiac disease, for as yet unexplained reasons. I looked at this for my new book, and found several interesting theories: our gut microbiota has been damaged by our diet, and this may disorder the immune system, so that it attacks the wrong proteins (such as gluten). We’re also exposed to a lot more gluten–it’s in tons of processed foods. Also, we bake bread differently– fast-rising instead of sourdough fermentations, which seems to break down the peptides that lead to reaction. Some people with intolerances can tolerate slow-fermented breads. And lastly, we’ve been breeding wheat to have more and more gluten. And lastly lastly, the power of suggestion– gluten intolerance is “catching” thanks to the power of suggestion.

With his AMA, Michael Pollan joins a growing crew of celebrities who have gone onto Reddit, including Barack Obama, the Mythbusters, and Woody Harrelson, among others. (Secret Redditor joke: Pollan should have called it Ask Me Anything About Ramps.)

If you’re in the mood for some serious, nuanced thinking about the state of the American food system punctuated by cat references, click here.