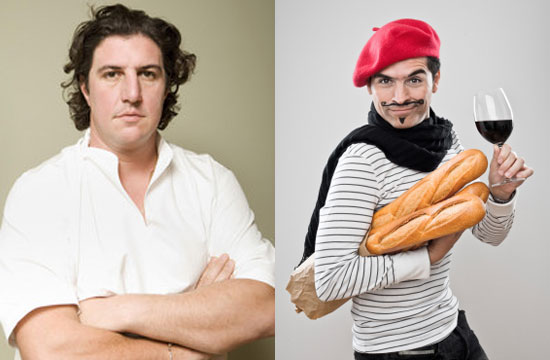 Proving that he can do more than burn amateur food writers (and win two Michelin stars), British chef and French expat Claude Bosi last week baited his former countrymen by calling them lazy and unimaginative.

“France is now a country of lazy people,” he lamented to Spear’s, a British magazine. “A very lazy country. They live in the past and just live on their reputations.

“While there are some young chefs moving things forward in Paris, most people are obtuse about what they like to eat. They live in this world where French is best. But I couldn’t do what I have been doing with Hibiscus in Lyon — they just stick to what they know. Whenever I visit France now, I’m so happy to come back to England.’

In addition, he tells Sitwell that he refuses to employ any Frenchmen at his restaurant, because they always are le tired. “Every time I try it’s a disaster — all they do is ask, ‘What time is my break?'” he groused. “I just tell them to go back home.”

Bosi’s rationale — that French welfare and benefits culture makes workers less willing to work hard — would be at home with, say, everyone who voted for Mitt Romney.

But before you British start acting all high and mighty about your food culture and throwing Spam at the French, calm down — Bosi likes your game and meats, but says “Forget about English wine, it’s piss.”