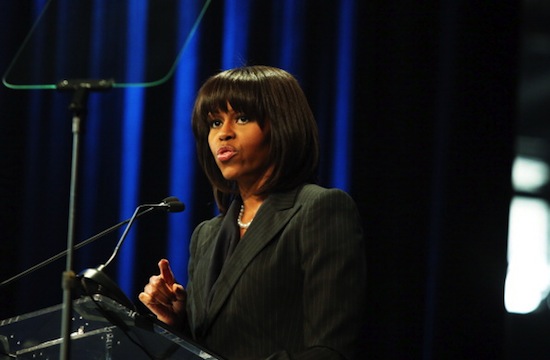 A new op-ed in The New York Times penned by Michelle Obama details the attempts by Congress to derail much of the work she and her Let’s Move! campaign has accomplished thus far. And it’s not just her school lunch reforms that are being threatened by the House of Representatives; it’s also the Women, Infants, and Children program — all because of some potatoes. She writes:

Right now, the House of Representatives is considering a bill to override science by mandating that white potatoes be included on the list of foods that women can purchase using WIC dollars. Now, there is nothing wrong with potatoes. The problem is that many women and children already consume enough potatoes and not enough of the nutrient-dense fruits and vegetables they need. That’s why the Institute of Medicine — the nonpartisan, scientific body that advises on the standards for WIC — has said that potatoes should not be part of the WIC program.

Of course, all this is leading up to the budget talks coming up for the House Appropriations Committee, who will take on the annual spending budget for the Agriculture Department next week, says Obama. So yeah, those terrible people we elected to office are throwing nutrition and science down the drain:

The bottom line is very simple: As parents, we always put our children’s interests first. We wake up every morning and go to bed every night worrying about their well-being and their futures. And when we make decisions about our kids’ health, we rely on doctors and experts who can give us accurate information based on sound science. Our leaders in Washington should do the same.

RELATED:
Dan Barber Pens NYT Op-Ed on the Failures of the Farm-to-Table Movement
Reports: ‘Industry Interests’ May Rip Apart School Nutrition Standards, Sam Kass Is On It
WATCH: Joe Biden and Julia Louis-Dreyfus Get Busted By Michelle Obama in the White House Kitchens