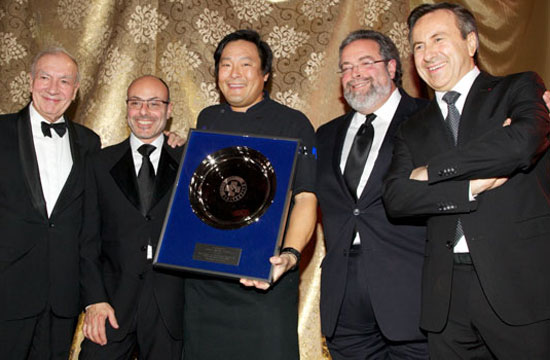 Having a child with severe food allergies is notoriously difficult, but when you’re a chef, it’s limiting and heartbreaking. Just ask Ming Tsai.

“My first reaction was that’s a really unfunny joke from upstairs,” he told ABC News after he’d been awarded the Lifetime Achievement Award by FARE, a food allergy advocacy group, along with colleagues Daniel Boulud and Alfred Portale. “I couldn’t wait to cook for my kid. That was my dream.”

But as he learned in time, his son’s allergies (he was born with seven of the eight most common allergies, and nearly died of anaphylactic shock multiple times) limited not just the types of food that Tsai could cook, but also the places where he could take him. Tsai recounted that he (a Famous Chef Person, mind you) once tried to ask a restaurant manager if there was anything on the menu that his son could eat:

“He just looked at me and said, ‘We’d rather not serve him,'” Tsai said, adding that waiters and restaurant managers used to roll their eyes when he mentioned David’s food allergies. “Don’t open a restaurant if you don’t know what’s in your food. This is absurd.”

He ended up ordering a sandwich without bread, which is not really a sandwich.

And this is why, at his restaurants in Massachusetts, Tsai goes out of his way to accomodate families whose children have severe food allergies — which he’s learned is such an utter rarity that he’s often thanked by crying mothers.