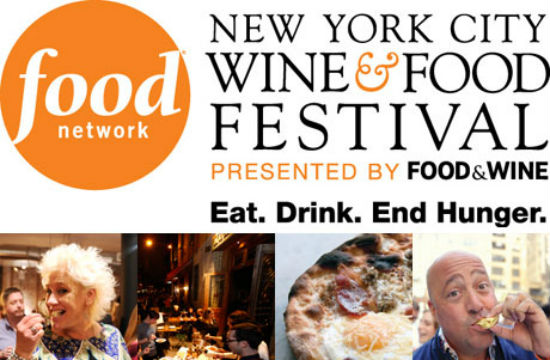 The New York City Wine and Food Festival announced its line-up for the October festivities this morning, giving you the whole summer to save up for fancy chef dinners, plot out which Food Network stars you’d like to stalk for photo ops, and scour Living Social for last-minute event deals.

The festival moves further uptown this year to Pier 92 and Pier 94 in Midtown, with its headquarters switching to the Hudson Hotel. Rachael Ray is back hosting Burger Bash; Guy Fieri is hosting a Rock of Ages party; Paula Deen is rocking her annual gospel brunch, and Jeff Mauro, Alex Guarnaschelli, Emeril Lagasse, Mario Batali, Michael Symon, Bobby Flay, Anne Burrell, and the cast of Chopped will all be on hand to round out a healthy roster of Food Network icons.

Personally, we’re most stoked for Alex Atala’s “A Night in the D.O.M.” event as part of the Bank of America Dinner Series. Daniel Humm and Will Guidara, Ivan Orkin, David Bouley, Sean Brock, Tyler Florence, Michael White, Dan Silverman and Michael Schlow, Giada De Laurentiis, and Rick Bayless are among the other chefs hosting dinners in the series as well.