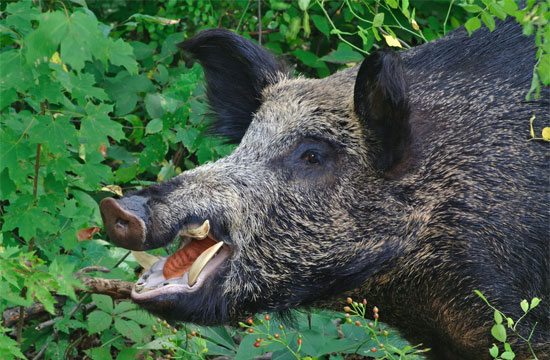 The problem with feral pigs is that they’re feral — as in, they have giant freaky tusks that are sharp and attached to a wild creature. (That’s how Robert Baratheon died on Game of Thrones.) So it makes a lot of sense that New York farmers are not particularly enthused with the idea of hunting boars, even though these pigs are destroying and rooting through crops with alarming efficiency.

But what if there was a HELICOPTER involved?

According to the Watershed Post, USDA officials have resorted to surveying upstate New York farms with helicopters and, with the permission of landowners plagued by swine, will slaughter them with a rain of bullets from above. While the helicopter flights will mostly be used to collect data about the pigs’ movements, the USDA admits that shooting pigs from helicopters is an effective solution to the farmers’ problems

Kelly Stang, wildlife biologist for the New York State Department of Conservation (DEC), said that to her knowledge, it’s the first time in New York State history that government officials have set out to hunt animals by helicopter. But the USDA crew has flown similar missions all across the East Coast…

“The crew that’s doing it, all they do is aerial operations,” Stang said. “The main goal is to survey — to see if we can find any from the air, where are they, how many. If they do have the opportunity to shoot them, they will take that shot.”

Before you think that helicopter pig-shooting is a legitimate solution to a silly problem, consider this: Texas loses $500 million in crops a year to feral pigs, and in Florida, they’ve shown themselves capable of destroying a $16 million F-16 fighter plane.

Oh god. They know we’re coming for them.