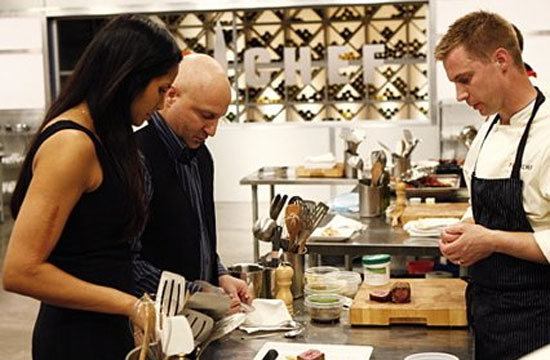 As we wind down for the day, we figured you’d enjoy watching a New York Times reporter get horribly disillusioned by reality television. To be fair, Steven McElroy actually liked the Top Chef cruise, despite its hokeyness (“Play poker with Hosea Rosenberg! Play basketball with Paul Qui!”), but as an actual glimpse of what it’s like to be on Top Chef? Without a producer from Magical Elves splicing only the entertaining bits together, it’s rather dull.

Here, yawn through this quick-fire demo with him:

Seeing a quick-fire in real-time, we hoped, would offer a look at what doesn’t make the final cut. We realized that what doesn’t make the final cut is probably pretty boring. Those suspenseful and sweat-inducing final minutes the chefs endure as they whip up a dish look awfully intense on television after being edited by a talented team, but in real time the challenge was actually rather tedious. Perhaps, since the chefs on the cruise were not truly competing for important stakes as they do on television, they didn’t bring their A games. But it is more likely that slickly produced reality television makes even the most routine tasks seem fraught with drama.

If only life were like reality television, huh? We could jump-cut to the end of the day where we’re zoning out in front of our TVs with a bottle of beer and takeout Chinese food.

Okay, maybe the jump-cuts should be left to actual reality TV show programs.

RELATED:
Bravo Getting In On Tourism Game With ‘Top Chef: The Cruise’
Even More Cheftestants Are Being Wrangled Onto The Top Chef Cruise