WATCH: Tim Love Drinks His Way Through Premiere Of Next Iron Chef: Redemption 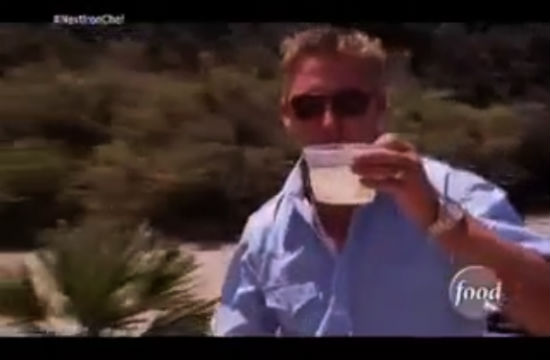 The last thing we were expecting from last night’s Next Iron Chef: Redemption was for Tim Love to come off like a complete tool. It’s really, really hard to look like a tool when you have a charming Southern accent and are standing next to Spike Mendelsohn and Marcel Vigneron. But Chef Love managed the impossible. From start to finish, he just didn’t seem to have very much fight in him — and this is Next Iron Chef: Redemption. Redemption! Dramatic music! Phoenixes rising and stuff!

First, Tim had to cook up his secret redemptive ingredient, kale, while demonstrating resourcefulness in a beach-side fire pit kitchen. He went the salad route in an effort to make the ingredient shine, and with all his extra time? Made himself a steak and drank white wine out of a soup container. Check out the clip below.

Watch how well that one went over with the judges.

Clearly, this behavior lands Tim in the bottom two showdown, where his secret ingredient is pineapple. And he proceeds to serve it with crispy cooked kale as a resounding retort to Donatella Arpaia’s earlier critique regarding how she would have cooked kale, if it was her secret ingredient. (Trufax: Donatella Arpaia has tasted more dishes in Kitchen Stadium than any other living, breathing human. Don’t tell Donatella Arpaia to fuck off with your food.) Oh, and he cooks up his elimination showdown dish while doing shots out of tiny ladles. So, totally serious about being the next Iron Chef, Tim Love is.