Achatz’s NEXT Vegan Gets Four Stars: ‘Most Dynamic Menu’ In Restaurant’s History 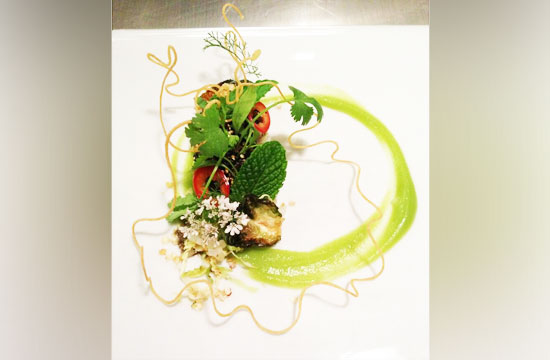 After much hype (and many pulverized fruits), the vegan menu at Grant Achatz and Dave Beran’s NEXT received a rave four-star review from The Chicago Tribune’s Phil Vettel. In a rare display of high praise, he declared it the best menu that the conceptual restaurant’s ever served. (Take that, el Bulli menu!)

“Whoa!” one might think. Cool music video/heist mini-movie aside, how can a restaurant who just served an entire menu worshipping fallen animals turn around and do a vegan restaurant?” The how in this case, though, isn’t as immediately relevant as the “Okay, just tell us if it worked or not” — and, according to Vettel’s glowing review, it totally did:

Nothing, not even the vegetable tasting menus that Charlie Trotter offered during his long career, compares to the Vegan menu currently featured at Next. In more than 20 courses across four hours, Next dazzles diners with one inventive vegan creation after another.

People who are vegetarians or vegans probably believe they have an idea of what to expect. They’re wrong. All the usual vegetable suspects, all the easy choices are either absent or invisible here. Hummus? Humbug. Tofu? Fleetingly present in a couple of dishes, but so low-key you could easily miss it.

Instead, think hollowed rambutan shells filled with a custard made from thickened juice and a touch of Earl Grey tea, a Jell-O shot for the healthy set. Crisp-fried purple majesty potato skins stuffed with potato sorbet, a frozen potato bite that tastes like a baked potato with sour cream. A dimpled white plate bearing white asparagus, wine-poached compressed pears and rice yogurt, over an undulating rice-cracker blanket.

Even more amazing: the multi-course tasting menu of moss, vegetables, and insane quinoa fabrications is surprisingly, counter-intuitively flavorful and satisfying. “I joked about eating an all-sausage breakfast the next day, as compensation,” Vettel wrote, “instead, I skipped breakfast entirely.”

For vegans, this revelation sets a new standard for what meatless dining can accomplish. For meat-eaters, this is the promise of a new paradigm to be exploded. And for everyone else — well, we’ll just put it in the words of Alinea alum Will Douillet:

Recapping 3 days of perfect restaurants I came to this: @dcberan made me eat green muck off a f****ing rock!? And I loved it!#whimsy