Where Are They Now All That | Shane Lyons Buford Grown Up 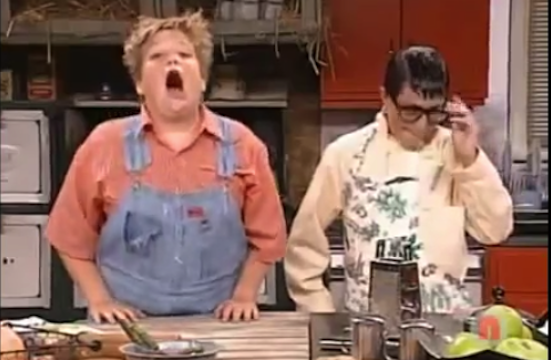 Before Shane Lyons opened up Distilled last month in Tribeca, before he did stints at Nougatine, Craft, Café Boloud, and Momofuku, before he graduated as the youngest person (by age 18) at that time from the Culinary Institute of America, Shane Lyons was a child actor. “I was the fat kid,” Lyons told the Village Voice.

Shane’s being modest here, people. He wasn’t just any fat kid, Shane was the fat kid, Buford from the Nickelodeon show All That. Now, Buford appeared on the skit, Oven Lovin’, so it’s obvious this must be where he realized his true calling as a chef. Okay, both his parents were professional chefs, too, but we’re sure it was Shane’s method acting to get into the mind of Buford that cemented his future career.

Since Shane’s days on All That his attitude for cooking has developed from going “Fracas” to something a bit more civil. “We don’t complain if you want steak well done,” he told the Voice. “You’re our guests. We’re grateful to have you. You’re crucial.”

Maybe he’s be used to the well-done crowd in LA, or maybe he just cares a lot about the customer. Either way, Lyons comes off as possibly the sweetest chef, and has certainly come miles from fracas-ing (not a ’90s Nickelodeon viewer? The video below might help.) It’s clear that at Distilled, Lyons holds his food and his customers on equally high grounds. He wants people to enjoy a great meal, and not have to go broke doing it.

“I don’t like when I know that someone has priced something in a way that is absurd and not appropriate for what you’re getting. There’s a fine line, and you always include labor and the value of creativity when you’re pricing a dish, but I really don’t like when people are being blatantly ripped off. I don’t like paying a lot for a tiny dot of food.”

That’s refreshing, especially in a town where a weekend out can equal next month’s rent. So what’s the best way to reciprocate for the friendly food and atmosphere?

“The nicest thing that anyone has done was ask that the whole kitchen crew [to] come out and take a shot, from the dishwashers to the head chef. That was a nice way to say thank you.”

You don’t have to ask us twice to party with Buford. As for Lyons’ storied television career, we hear the Food Network could use a new Southern personality, if he’s ready to get back into acting.