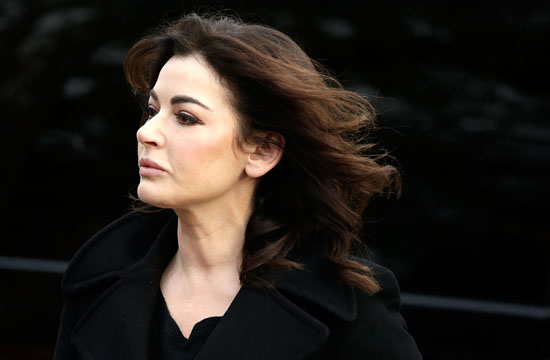 While yesterday’s testimony in the trial of Elisabetta and Francesca Grillo included some startling admissions from Nigella Lawson about her former marriage with Charles Saatchi and her previous drug use, today’s cross-examination is, though legally quite important, lacking in sensationalist drama, which is the only thing anyone cares about.

The drama of her first day in court completely overshadowed the real reason that Nigella Lawson is testifying, which is that the Grillo sisters allegedly stole £685,000 from Lawson and her ex-husband from credit cards they’d been authorized to use while working as personal assistants for the couple. (Lawson, who initially refused to testify, said she was “compelled” to do so after the sisters accused her of being hooked on drugs for a decade, and Saatchi pretended to confirm their suspicions like a bitterly divorced man.)

So far, Lawson’s cross-examination involves her verifying every single expense the prosecutor found in her bills, as well as describing her working relationship with the Grillo sisters. This has gone on for three whole hours. We can sense that the live-bloggers at the UK tabloid The Mirror are getting annoyed at the fact that they don’t get to report on choking, domestic violence, or drug-fueled psychosis:

Ms Arden asked the chef to explain how she had identified which transactions on Francesca’s statement had not been authorised and whether any notes had been made.

The celebrity chef said she had seen the statements online. She continued: “They (statements) are all on the computer. I just went through and marked them and since then have not seen them.”

Ms Arden asked Nigella where the notes she made currently were. She was informed that they were still on the computer of personal assistant Anzelle Wasserman.

Expressing her frustration at how long her cross-examination was taking, Nigella added: “If you ever get round to finishing with me, so you can call Anzelle, you can ask Anzelle.”

We’ll update if anything more sensationalist and less legally-driven pops up, but in the meantime, here’s a Vine of Nigella Lawson fiercely power-walking past the papparazzi into court this morning:

A few people said to me yesterday they could watch Nigella walk into court forever. Now thanks to Vine you can. https://t.co/qw9usAF0bA