North Korea Has Best Leeks In World According To PR 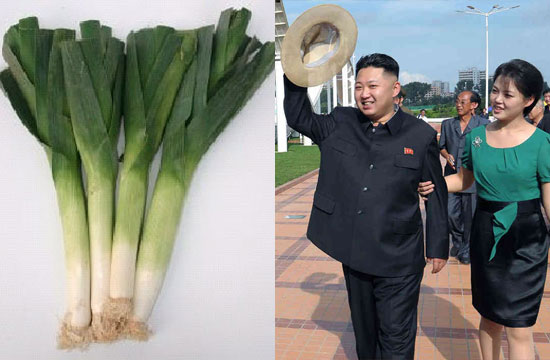 Here’s a little inside baseball for people working in food media: we’re always, always, always being pitched stories from PR contacts, which mostly cover topics not relevant to our site, food products, or events we don’t want to attend.

It’s not every day that we see a press release from the Democratic People’s Republic of Korea, sent from Pyongyang, celebrating the culinary heritage of a Korea blessed by the auspicious rule of Kim Jong-Un, whose wisdom and  willpower shall soon destroy the American imperialist serpents in a rain of nuclear hellfire (long live the Supreme Leader). From the official English news website:

Pyongyang, March 28 (KCNA) — The Koreans have used for spring dishes various species of herbs good for health, including leek.

Leek, a perennial plant, is regarded as a vegetable unique in taste and odor and it is cultivated between early spring and autumn.

Leek can be taken in various forms of dishes and used as a bun stuffing.

Its seed is good for diuretic, leaves and stalks for stanching and bulb for diarrhea. Also leek is efficacious for curing gastroenteritis, bronchitis and nervous prostration.

Korea has a long history of its cultivation

According to books published in the period of the Koryo Dynasty (918-1392), kimchi made of leek had been considered one of the national memorial service’s food. The plant has been cultivated in various localities with different names.

First off, this is how you get our attention, PR people! We will automatically write anything that’s connected to brutal dictators in communist regimes that want to destroy the world.

Second, the act of telling us about North Korea’s leek supremacy signals a drastic policy change in the Un regime, as his late father Kim Jong-Il preferred to look at food. However, it’s impossible to tell at this point whether any member of the Kim regime will actually give people food.