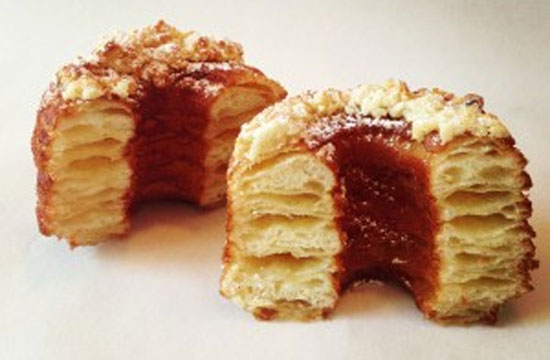 Eric Ripert was really, really lucky that he got his hands on a Cronut when he did, because now the Cronut is a valuable commodity only available to the time-rich. How rare are these precious Cronuts? So rare that Izabela Wojcik, the director of programming at the mighty James Beard House, can’t even get one whenever she wants.

Here’s an entry from her The Huffington Post Food Informantdiary: “Finalize a preorder of Cronuts from Dominique Ansel bakery in Soho as a surprise to my colleagues. There’s been such a media frenzy surrounding this croissant-donut hybrid, not to mention reports of crack-of-dawn waiting lines and an emerging black market on Craigslist, I finally succumb to the noise.”

Alas, it was not meant to be: “I’m placed on a wait list and schedule a time for late July. By the time the date arrives it will be lovely surprise.”

When even kings (or Directors of Programming) cannot receive Cronuts at their wish, that is a bleak omen for a dreadful dessert war. We’ve already seen a black market for the pastries pop up, as well as tension swirling around anyone who could get their hands on one. What shall become of the peace, now that brother is killing brother, chef killing commis, blood (or strawberry jam) spilling into the gutters of SoHo as underemployed bloggers claw at each other for a bite of the holy grail of donut/croissant hybrids? What a tragedy. My kingdom for a Cronut.