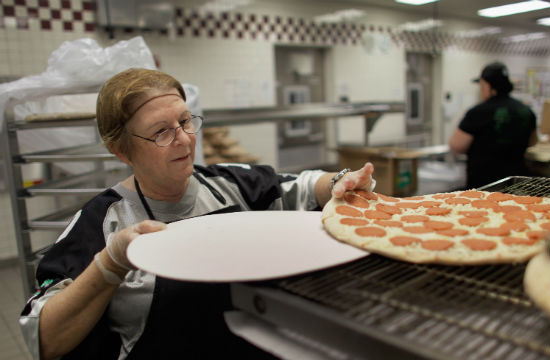 Yes, a certain Missouri Senator making up a distinction called “legitimate rape” may have won the Wait What?! News Of The Day Award, but New York City’s confusing end to a wildly popular school lunch program definitely ranks somewhere in the top ten. WITS, or Wellness In The Schools, was a program that placed professional chefs in the kitchens of New York City’s public school cafeterias to help create new, fresh meals to be served in place of the processed, pre-packaged ones.

WITS is sort of like an NYC-exclusive version of Chefs Move To Schools, which is a program that pairs pro chefs with public school kitchens across the country as part of Michelle Obama’s Let’s Move Campaign. According to Michael Anthony, the executive chef at Gramercy Tavern who was paired with PS 41, WITS “was met with an enormous amount of enthusiasm from kids, parents, cafeteria workers and administrators.”

But Department of Education spokeswoman Marge Feinberg says the meals being developed by WITS chefs (which included entrees like vegetarian chili, pasta with fresh pesto, and roasted chicken with homemade spice rub) don’t meet the elevated health regulations set forth by the Child Nutrition Reauthorization Act, which allocates an extra 6 cents per meal for schools who can meet the standard. So the program is now defunct.

WITS’ licensed nutritionist Sharon Richter is going back over the menus to see where changes need to be made, but, as far as she can tell, the adjustments would be minor things like adding fruit to the salad bar and mixing up the vegetable rotation. “It’s a very obvious thing how much healthier these are, the recipes made from scratch as opposed to prepackaged food,” she added.

Uh, yeah, Department of Education, what gives? ‘Cause remember that time pizza was designated a vegetable by Congress? That seemed kind of fishy, too. Sure, professional chefs may do that pesky thing where they throw a small bucket of salt in a dish to make it taste good, but there’s no way a liberally-seasoned roast chicken turns out to be worse for you than a preservative-packed frozen entree reheated by a lovable woman in a hair net. And spokespeople involved with shutting down the program are remaining oddly mum about it, refusing to give explanations of any kind.

Parents are understandably upset that the program has been cut, but WITS’ co-founder promises to continue their work, even though they are no longer allowed in the kitchens.

To that end, adds Anthony, “We will continue to be dedicated to the kids at 41 and to the organizers of WITS to see that it doesn’t just go by the wayside. It’s important to stand up for the right of our kids to eat healthy food and live healthy enjoyable lives.”