Who Judges The Judges On The Taste? Apparently The New York Times Does 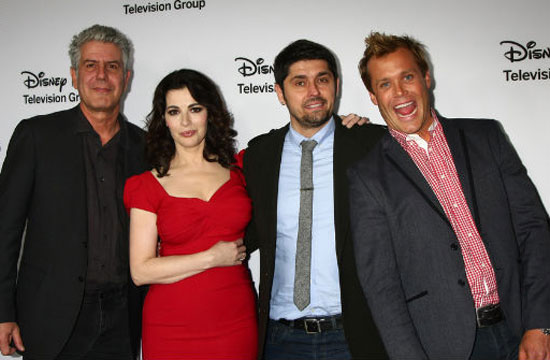 We are literallythisclose to the premiere of The Taste, and thus it’s time for Important Television Critics to preview/review the show. Already, the New York Times has many many opinions about the show, particularly that it’s not just a foodie ripoff of NBC’s The Voice (which it is), but also “better than the original, if your definition of a better reality contest includes more rational and less insulting to the intelligence. (Yes, that’s a big if.)”

The underhanded compliment festival continues as a certain Mike Hale goes on about the judges:

Being confined to not just a set but also a desk has a double effect: it mostly eliminates the creepy-uncle vibe he sometimes gave off during the tipsy schmoozing on “Anthony Bourdain: No Reservations,” but it also accentuates a disturbing capacity for the smarmy sincerity of the game-show hack. The jury is out on what an eight-episode season will do to his credibility.

Oh my. And Brian Malarkey?

He’s the peppy, relentlessly enthusiastic one, and you want to hate him, but beneath the Willy Wonka-meets-SpongeBob affect he’s sensible and appears more than a little self-aware, and he says concrete things about the contestants’ food that we can understand.

“Willy Wonka plus Spongebob,” seriously?! What will this man say about dearest darling Nigella Lawson?

She has two roles: to react disapprovingly to the men’s profane, sexist or over-the-top pronouncements, which she does with polish and humor, and to cheerlead for “home cooking,” which she does with a regularity and sameness that quickly becomes off-putting.

Oh god, what does this passivefruit haterade portend for Ludo Lefebvre?

In the opening episode, when he and Mr. Malarkey both want Sarah, a 27-year-old food blogger from Florida, for their teams, Mr. Lefebvre purrs to her in his velvet-accented fractured English: “I really, really love to help you and hope to give you so many aspiration and creativity and do the road together. Please.”

…excuse us. This description of The Taste’s apparent “breakout star” has given us the vapors, as, indeed, Mike Hale intended it doth.