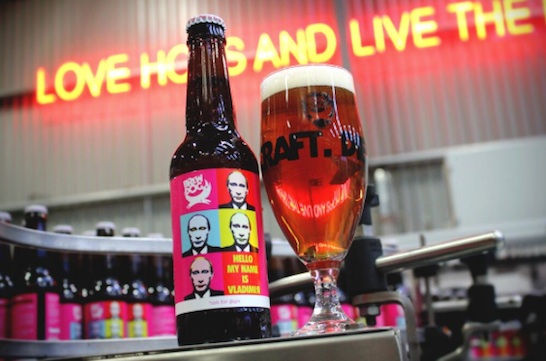 If you’re like us and have Sochi drinking games on the brain, you better head to Scotland to pick up this very special Sochi-themed beer — you know, one that slams Putin and the Russian government for its “sick, twisted” anti-gay legislation. The beer’s name? “My Name is Vladmir.”

The BrewDog beer needs no other introduction:

“Hello, my name is Vladimir. I am a beer for uber hetero men who ride horses while topless and carrying knives. I am a beer to mark the 2014 Winter Olympics. But I am not for gays. Love wrestling burly men on the Judo mat or fishing in your Speedos? Then this is the beer for you!”

BrewDog, which claims to have sent a case to Putin (though we can’t imagine it making it through the president’s doors), then issued a much more serious statement. “The sick, twisted legislation brought about in Russia that prevents people from living their true lives is something we didn’t want to just sit back and not have an opinion on,” said BrewDog in a statement.

And the beer’s social stance isn’t the only amazing part — judging by its description, the beer itself sounds pretty great. According to a press release, the beer is IPA made with Limonnik berries, which boasts “flavours of malt sweetness and a touch of acidic berry sharpness.” Oh, and “a finish as long as a cross-country topless ski journey through Siberia.” YES. Cheers to you, BrewDog.

How many of you guys are enjoying Hello My Name Is Vladimir in our bars tonight? Come on, shirts off, #NotForGays! pic.twitter.com/gBHGeRkmM9

RELATED:
Let’s Keep Trolling for #SochiProblems and Weird Foods, Shall We?
Sochi Serves All Foods ‘In the Ass,’ Continues To Relentlessly Troll Itself
Breakfast Links: Chobani Yogurt, Like Gay People, Banned from Sochi Olympics