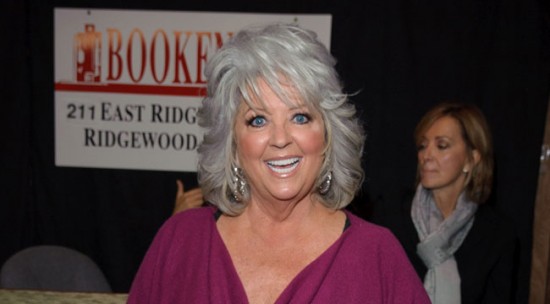 This post-diabetes Paula Deen comes courtesy of the announcement profile of Chicago Tribune’s Christopher Borelli, who journeyed to the hinterlands of Joliet, Indiana to witness the opening of her first restaurant outside the South.  And boy, oh boy does he get money quotes, particularly when Deen reveals that Television Mother Superior Oprah warned her BFF about the consequences of her drug endorsement.

“Oprah had been to see me right before,” she told Borelli. “And when I told her we (were) going to New York to make that announcement and that I doubted anybody would really care, she laughed. She said, ‘Oh, Paula Deen. Oh, yes, they will care.’ [And] I was very surprised when they did.”

The rest of the profile, much of which is completely unedited segments of transcript, contains priceless examples of Deen’s cognitive dissonance at work:

And: “We all get paid for our work. Thank God, we live in America. Victoza, Novo Nordisk — they hired me. I get paid for my work.”

And even this, when Borelli points out that her vegetables are drowning in butter: “The benefit of eating vegetables far outweighs a stick of butter.”

Still, everyone knows that Oprah Knows Everything And You Question Her Judgement At Your Peril.

Apart from the interview, Borelli gives the reader a well-illustrated tour of her new Joliet restaurant Y’All Come Eat, depicting it as less of a restaurant and more of a baffling, buttery Potemkin village with an unavoidable gift shop, pre-recorded messages from Deen emitting from every corner, and piles of butter-themed souvenirs. The piece is really, really good.  Go read it. If you’d like.  Because this is America and we won’t force you to do anything. Y’all.