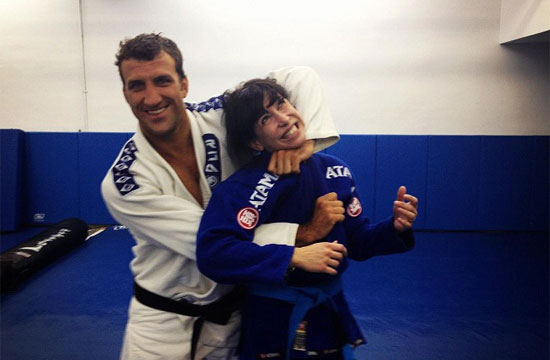 Though she’s a well-known practitioner of Brazilian jiu-jitsu, Ottavia Bourdain is a natural ally of mixed martial arts (MMA) — a sport that is illegal in the state of New York. (The only other state banning it: lame old Connecticut.) As one of America’s most prominent ass-kicking moms, she will join a group of other women — “Female athletes, gym owners and mothers”, according to CBS6 Albany — in a press conference today in Albany, demanding that the State Legislature legalize (and collect stupidly lucrative tax revenue from) MMA matches.

The battle to legalize MMA in New York stretches back to 2007: New York Daily News reports that the Ultimate Fighting Championship league, which essentially spawned the sport in Brazil and grew its popularity in the US, has spent over a million dollars in lobbying, and nearly $600,000 in campaign donations, towards its legalization. While the Republican-controlled State Senate has repeatedly attempted to pass a bill legalizing the sport, these bills regularly die in the Democrat-controlled State Assembly (though support appears to be growing among the lower house).

Perhaps not-so-coincidentally, the all-women press conference comes days after reports from Albany suggesting that State Assembly Speaker Sheldon Silver (D-Manhattan) would kill any potential MMA legalization as a concession to women’s groups upset at his egregious mishandling of a sexual harassment scandal involving one of his own party members. (The women’s groups aren’t exactly the biggest MMA fans.)

Ottavia confirmed via Twitter that she would participate in the conference (with proud husband cheering her on from Singapore). We would like to see Ottavia sic her daughter on the Assemblymen should they bar legalization, and will certainly update this post should that dream come true.