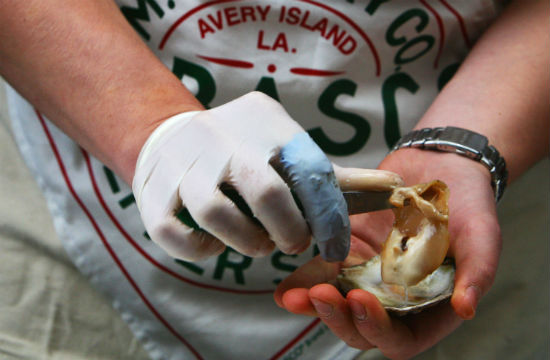 Remember that creepy Craigslist ad seeking sexy oyster shuckers in New York for a new restaurant? Well, the creeps appear to have been revealed! An Amsterdam service (of course they’re based in Amsterdam) called Oysters XO rents out “oyster girls” for parties, and they just landed in NYC. As you can imagine, the ladies dress according to the occasion, and wander the function for which they are hired with buckets of oysters strapped to their waists, sexily offering up freshly shucked shellfish for you to slurp from their crotchal area. Subtle!

How do we feel about sexy oyster shuckers? Empowering for the enjoyment of an oft hated-upon mollusk? Or offensive to and exploitative of the art of shucking?

To be fair, the official website does offer educational facts on the oyster-as-an-aphrodesiac origin story: “It was Casanova who consumed more than 50 oysters per day, sucking oysters from between the breasts of a desirable woman.”

We assume that particular service is only available off-menu.

As we pointed out when we first heard about this, shucking is just about the least sexy kitchen task one could perform, or at least, that’s the way TV makes it look. There’s constant finger-gouging, bleeding, grunting. Although, we suppose the right girl could make all of the above seem sexy…

Along with the buckets of tips the girls are sure to collect, they’re being paid $13.33 an hour according to the ad from a couple of months ago, so at least they’re making decent wages Totally Based On Their Shucking Skill And Not At All On Their Looks, right guys?

So will you be calling up Oysters XO for your next office party? We welcome tips on the services not advertised.