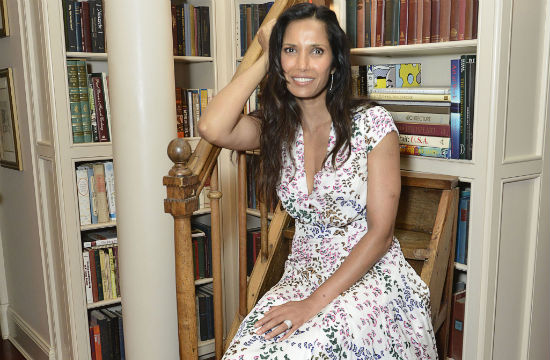 It’s Padma Lakshmi Day; we’ve come to terms with it. First, her very own Top Chef: New Orleans webseries Padma’s Picks was released today, celebrating her very own private mini-competition to choose the final chef-testants. Then she did a Reddit Ask Me Anything today, plus she’s going to be on Watch What Happens Live tonight. It’s okay. It could be worse. At least she has a soothing voice.

So what fun tidbits did we learn from her AMA? Besides the fact that she’s a super-polite interviewee (okay, fine, technically we already knew that), the following:

1. Padma’s Picks was inspired by a previous docu-series she worked on.

“Well, years ago I did a documentary series called Planet Food in Spain where I had to eat some bull’s testicles. And I can safely say I’m not a fan. In fact, it’s funny because sometimes early on in each season of Top Chef, there is always that Fear Factor episode where I just cringe and plug my nose through it because I’m not naturally very carnivorous. Actually my new series that just went live right now called Padma’s Picks was partly inspired by my work on Planet Food, so do enjoy watching it.”

“I didn’t set out to be an inspiration because of my scar, and it took me a few years to get to the place where I was comfortable with all of my body, really. I was 14 when I first got the scar and it’s a tender, awkward time for any girl. So I’m very pleased and honored if it helps you or others in any way.”

3. Yes, shooting in NOLA was the fucking best:

“New Orleans had the best of everything. It had great food, and great music, and also it was really child-friendly. Most people don’t think of New Orleans as being child-friendly because everyone thinks of it as being a place to listen to live music late at night, but we had a ball. MY mom came to stay with us, and we went to the Aquarium and the Children’s Museum several times. We also went to the Imax and the Zoo and to the Wild Animal Park by John Besh’s house. And I never go out that much when I’m working because my hours are so crazy, but I probably went out more in New Orleans than in any other city I’ve ever filmed. And I love that there is no pretense. I went to music halls where there were skater dudes, and college girls, and middle-aged couples, and a few grandmas dancing, and everyone was having a good time.”

4. All her judges’ table faces are real:

“First of all, I was genuinely upset, but I am really upset most of the time. I loved CJ [Jacobson], and he is definitely someone who stands out across the seasons, but telling a chef to pack their knives is the worst part of my job.

I am the person who spends the most time with the chefs. I am in the kitchen with them every single day. And I know how hard they work, and I can see how passionate they are about being the best that they can be.

And to leave your family and friends and your work, and take that personal and professional battle on with cameras rolling and millions of people watching you is just plain hard sometimes. It’s as wonderful when you do well as it is awful when you don’t. And I physically feel that pain along with them. I can’t help it, I never had much of a poker face.”

“Honestly, the first season it was hard for me to let Sam go in the finale. But I was outvoted by my other judges. I still feel that, that day, Sam gave us the most original and delicious food.
I really love Ilan Hall. I think he is a wonderful chef, and he is also by the way fun company.
But at the end of the day, it’s not only up to me.

Other than that, I must say that I stand by the decisions that we judges collectively have made throughout and across the seasons. I can’t really look back and say ‘Oh, we let the wrong person go.’ As much as we may or may not have liked that chef personally.”

“Actually, Ilan Hall made the best dish I’ve ever had on Top Chef. It was in the last episode in California, we went to Santa Barbara with Eric Ripert. Ilan made a beautiful spanish dish with noodles and seafood called Sedillos Con Chorizo.

It was divine. It’s this beautiful baked bubbly dish with clams and spicy chorizo, and it was so good I finished my whole portion and half of Eric’s portion. I think that was the point where I got the nicknam (sic) Padma ‘are you gonna eat that’ Lakshmi.”

“We take everybody’s opinions who sit in the judge’s chair equally. You don’t have to be a food expert to know when something is right or wrong. And there are four of us up there, and that keeps it balanced. We don’t make them do any palate tests. Usually if it’s a celebrity comes on, it’s because they have some connection to food or they are just an extreme fan of the show. Natalie Portman separately stalked me and Tom every time we were at an event, and told us how much she loved the show, and I invited her to be on so that’s how she got on the show. A couple of other people, same thing. We have some other wonderful people who would love to be on the show who we haven’t had yet just because the schedules haven’t worked out or whatever.

I feel like Top Chef is such a part of popular culture that it’s nice when we can incorporate other figures who are also in pop culture who are also in the zeitgeist at the moment. For instance, Pee-wee Herman (who had a tv show years and years ago before anyone had the idea to do a Top Chef) was — by the way — our single most popular celebrity guest judge. Even our crew was walking around like giggly teenage girls, and some of us even dressed like him in homage. For instance, my assistant Jason Duffy not only dressed himself in a white collar shirt with a red bowtie with slicked-back hair, he dressed my daughter like that too. Lucky for him, she was at an age where she didn’t have a choice in the matter.”

“The truth is we don’t have time for that many pranks because although we film the show ahead of time, it’s shot pretty much like a live show. However during the finale when we were in Singapore, my hairdresser and I did play a prank on the producers. We did my hair back, but left the front bangs gelled up, Something About Mary style. I basically looked like Woody Woodpecker on a bad day. And Michelle called from the car and whispered to the producers that I insisted on having my hair done in this really horrendous way because I had seen something like it in Italian Vogue, and she was giving them the head’s up because I was being really sensitive about it. And so we got to set with a total straight face and walked through the whole crew (lighting, sound, culinary department) and it was amazing how polite everyone was being with me until I got to the control room, where they tried to talk me gently down of the hairdo. They were going on and on and getting pretty nervous (and Michelle and i knew we could comb it out really fast) and it was really funny when they found out that I was not crazy but was rather playing a prank on them.

We always joke about what we are going to wear at each challenge — because other than my or Gail’s wardrobe, it’s pretty much men in suits and chef’s coats. So we try to jazz it up a little bit.

“Fifth question: There was no pea puree debacle! Nobody stole anybody’s pea puree. I don’t know what all the fuss was about. If it did, we would have heard about it and we would have dealt with it accordingly and fairly.”

“Two people spring to mind immediately, both very very pro. First and foremost, Alice Waters. Alice more than anyone else I believe has inspired our modern attitudes about food. About eating fresh, about eating local, about all of it. Her work in and out of the kitchen is truly remarkable, and what she has achieved with Chez Panisse since the ’70s is incredible. She is certainly the modern inheritor of M.F.K. Fisher’s mantle.

The second person is actually someone who has burst on the scene out of Europe: René Redzepi of NOMA in Copenhagen. Probably made me the single most delicious and intriguing restaurant meal I’ve had to date. He served a simple seven-course meal that was basically a sonnet about a boy who loved the woods. Everything from the Swedish Butter to the Wood Sorrel that was foraged around the forests outside of Copenhagen were sublime. It is an extremely precise and eloquent example of the fact that the best food tells us stories of who we are.

Tell me how a man eats, and I will tell you how a man lives.”

RELATED:
Padma Lakshmi On Top Chef, Treme, And Why Richard Blais Was Destined To Lose His First Season
WATCH: Binge on All 6 Episodes of Padma’s Picks