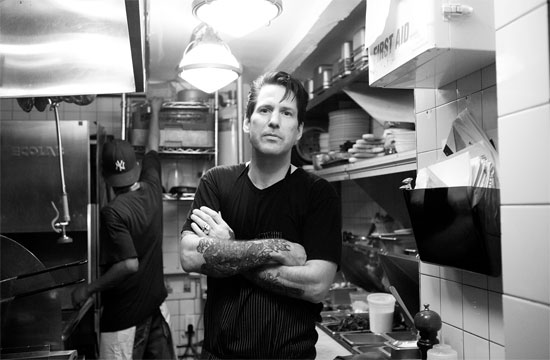 Last fall, veteran chef Paul Gerard opened Exchange Alley in New York’s East Village. The type of restaurant where a beautiful woman will smack you in the face with a steak (seriously, the first thing a guest sees upon entering is a giant, conspicuous mural of this woman), it’s a fitting place to house a Brooklyn boy by way of New Orleans. Gerard’s reputation as a self-proclaimed “pirate” overlies a history working in New Orleans’ best restaurants that echoes the rock-and-roll lifestyle celebrated by Kitchen Confidential: “We were all very  focused, working very hard, and we were all very good at what we did, and we partied with same fervor,” he told us. “But we were all in our 20s but it was a lot of fun. And we showed up the next day and said, ‘Yes, Chef,’ and do the same thing over and over again.”

Read on to find out what happens when a pirate grows up and settles down.

Paul Gerard: It’s so true. You know the song, “You Know What It Means To Miss New Orleans”? It goes from anybody who spent a weekend at Jazzfest, to somebody who went to Tulane, to someone who’s lived there for quite some time. It sticks with you, it’s in your soul. You know?

I do know. It’s kinda pathetic.

No, those are the good points, not pathetic! That was one of the best things about New Orleans: you could do whatever you wanted and nobody would say anything because next weekend it might be them.

That’s so true.  Did anything crazy happen to you?

I lived there for 15 years, like a pirate. Lots of crazy stuff. [Sarcastically, to restaurant manager tapping away at a laptop in the corner] Morgan, did anything crazy ever happen to me in New Orleans?

It’s crazy, I always refer to [my time in New Orleans] as partying with the parade of success stories because we were at the best restaurants. My partner, John [Harris], and I came up together from Bayona and I went to Restaurant August and Gautreau’s with him. We were all very focused, working very hard, and we were all very good at what we did, and we partied with [the] same fervor. But we were all in our 20s but it was a lot of fun. And we showed up the next day and said, “Yes, Chef,” and do the same thing over and over again.

How does that crazy cultural influence affect you as you mature as a chef?

Get older, you mean?

You can read whatever you want into that!

I’ve always ended up likening everything I do into music, because people understand that a little more than as a chef. But it’s kinda the same way. You work different places, you train different places. Different skills from different chefs, be it good or bad, then it shows up in your music. It’s not their music. There might be bits of flamenco, but you’re not a flamenco guitarist. It’s kinda the same — there are only twelve notes you can play in music, and all the ingredients are the same. It affects you, and once you start developing into your own style, you start to leave behind what they taught you. There’s always core skill and core techniques that you always use.

I think developing any kind of craft, especially an artful craft, you have to break a way at some point. For me specifically, as I matured as a chef, I kept leaving things behind and pulling things out. It just shows more confidence and security with what you do. When you see things with a lot of ingredients, it’s very busy and a little insecure. I wanted to find more purity in what I was doing. I was very into classic French techniques, and now I like to riff on it. But it’s all still there. I like to work my ass off and make it look effortless. It’s like you don’t know what goes on back there but when you get it, it looks very simple. And that took years to get there.

Does that evolution have anything to do with your move back to New York?

Well, I grew up here, [but] I think New York has a little bit of a difference. After I left New Orleans, I lived in Puerto Rico for a little bit, then Panama, London, San Fran — but New York is New York. It is the greatest city in the world as far as I’m concerned. I wanted my years of training to culminate here. It was a dream of mine to take everything I learned and bring it back here and set up shop.

What is it like trying to open a New Orleans influenced restuarant in New York City?

Ever since the beginning I’ve been counting this as not a New Orleans restaurant but a New York restaurant with a NOLA flair. A Big Apple to Big Easy kind of thing. When I was raising the money, people would say ‘What’s your concept?’ It’s not a concept, though, it’s an identity.  My personal identity is the same as my restaurant’s identity. I’m a New York guy that spent a lot of time in New Orleans and I have a huge connection there, but it’s the same exact thing. I wanted it to look like the places my father used to take me when I was a kid. But any time of New Orleans stays with you, after fifteen years, it wouldn’t leave me.

Like pretty much all the random, eclectic antique lamps and artwork you have in here.

Exactly. And I wanted the garden to look the same way.
[The garden is full of assorted cultural tchotckes, including piles of spare bricks, a collection of grills, and a cruiser spray-painted gold. It’s a New Orleans garden.]

NOLA seems to be making a big comeback, or least it will when Top Chef: New Orleans comes onto the scene. Tom Colicchio did an interview with the Times-Picayune where he said a lot of New Orleans chefs have tough time bringing that cuisine out of the city. Have you been able to translate something that seems to have been frozen in time into your restaurant?

One of the reasons I’m very adamant about this being a New York restaurant with a NOLA flare is because it is really hard to translate New Orleans food here. And my style is much more based in classic French and Italian cuisines, more toward the Italian side, growing up in Brooklyn. My roots are deeper there. Having the jasmine and smelling the heat, and smelling the crawfish boils on Decatur Street, and having the server come up to you with terms of endearment. So when you take the same dish out of there, you’re missing something — you’re missing New Orleans.

So it’s one of the cases where the culture supports the cuisine?

Not the other way around?

It’s two hands working together. You can have flavors of it, but you have to put in some of the culture with it. Like the music library here; I have some people coming in, like Dr. John’s first agent — he said, ‘I represented him and I never heard that song.’ We put in some of the lighting and the feel, and the vibe and my staff here is fantastic. So we give the same warm feeling when you come in.

Is this some sort of alternate restaurant universe?

I was very fortunate because the staff that I have have worked with me in other places so it wasn’t like I had to hand them an “Exchange Alley Manual.” They knew what I wanted and how I interact with people. They know the things that I don’t like when I go out to eat with people and I hate it when you walk into a restaurant and you look like you’re inconveniencing the person. This is so much of an identity. I spend far more time here than where I sleep so you know this is my home, and that’s why I built it like this. The servers are the frontlines of all of my beliefs and the reason they came here after working in those previous places is because it is their beliefs, too.

In part two, Gerard talks to us about television celebrity chefdom and kids these days. Here are some other interviews to keep you busy until that one posts.
From Wendy’s To The Big Easy: Rick Tramonto On His Culinary Education & A New Start In NOLA
Adam Richman On Hush-Hush New Projects, NoLa Politics, And Why Audiences Need Him
Wylie Dufresne: ‘Delicious Is The Most Important Thing’

This interview has been edited and condensed for length and clarity.