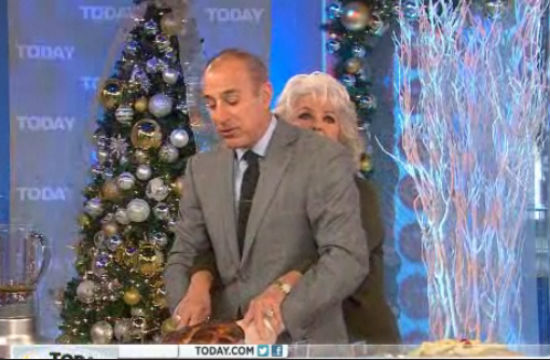 Paula Deen was supposed to appear on the Today Show this morning, ostensibly to clarify and apologize for racist statements in a deposition where she admitted to using the “n-word” and dreaming of a Southern plantation wedding catered by black men dressed as slaves. Unfortunately, we won’t be seeing that apology today. Matt Lauer announced that Deen canceled at the last moment.

“Paula Deen was scheduled to do an interview with us this morning, live in our studio, but we just found out, she’s a no show,” he tweeted earlier, before deleting that tweet and explaining the situation in depth at the very beginning of the show.

According to USA Today, Lauer “said he had chatted with her on the phone last night when she had flown in to New York, but that he hadn’t talked to her this morning. Her rep told him that she was ‘exhausted.'”

He later tweeted that he was “hoping to get more info on the Paula Deen situation soon. Very confusing.”

You can check out the explanatory clip from the top of this morning’s Today Show below, in which Matt announces, “She has not called us at all this morning. Her publicity person and I spoke a little while ago, simply said they believe she is in the hotel, but she has not confirmed anything other than that she is not here.”

Al Roker lays down an uncharacteristic call-out, too, adding, “And she’s been on the show so many times, she’s a friend of the show, we consider her a friend, and we would hope that she’ll reconsider because she really needs to address this.”